Shares
A 220-pound gold coin named "Big Maple Leaf" has been stolen from a museum in Berlin. 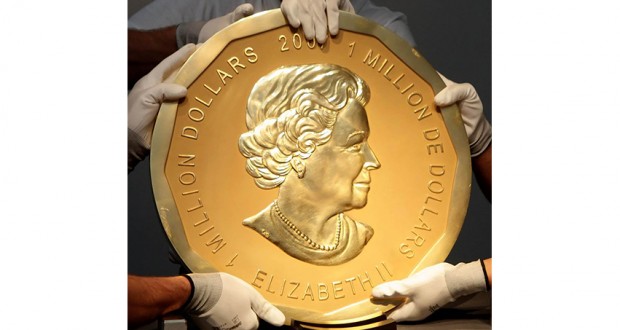 By weight alone, however, it would be worth almost $4.5 million at market prices.

The museum says the coin is in the Guinness Book of Records for its “unmatched” purity of 999.99/1000 gold. It has a portrait of Queen Elizabeth II on one side and maple leaves on the other.

The coin was issued by the Royal Canadian Mint in 2007.

It was loaned to the Bode Museum from a private collection in December 2010.

Police said it was probably stolen by a group of thieves who entered the museum undetected through a window, possibly with the help of a ladder.

“Based on the information we have so far we believe that the thief, maybe thieves, broke open a window in the back of the museum next to the railway tracks,” police spokesman Winfrid Wenzel said. “The coin was secured with bullet-proof glass inside the building. That much I can say.”

The Bode Museum has one of the world’s largest coin collections with more than 540,000 items.