Shares
The UK government has formally served divorce papers on the European Union, signaling the beginning of the end of a relationship that has endured for 44 years. 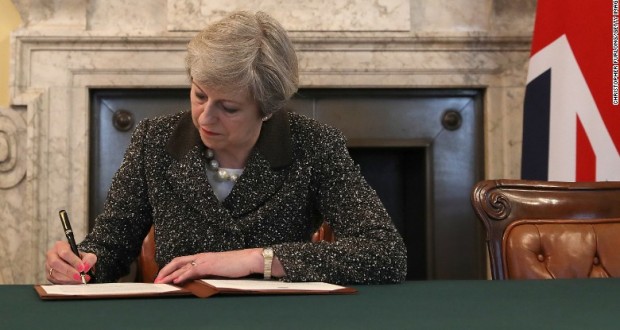 Theresa May, the British Prime Minister, confirmed that the UK has triggered Article 50 of the Lisbon Treaty, beginning a legal process that must end in two years’ time with Britain leaving the EU, according to CNN.

“This is an historic moment for which there can be no turning back. Britain is leaving the European Union,” May told the House of Commons in London.”

A few minutes earlier in Brussels, the British Permanent Representative to the EU, Sir Tim Barrow, delivered a six-page formal letter of notification to Donald Tusk, the President of the European Council, in Brussels.

“The Article 50 process is now under way, and in accordance with the British people, the United Kingdom is leaving the European Union,” May said.

This official start to the Brexit process comes nine months after the country voted in a hotly contested referendum that exposed deep divisions across the country.

The Foreign Secretary, Boris Johnson, one of the leading figures in the referendum campaign, expressed his delight at the outcome. “It’s a great day,” he said as he left a meeting of the Cabinet in Downing Street.

Barrow arrived at the European Council headquarters Wednesday morning, emerging from a black Jaguar holding a briefcase containing the letter signed by May in Downing Street on Tuesday night. His route had been kept secret in an effort to avoid any attempts to intercept the letter.

“After nine months the UK has delivered,” Tusk said on Twitter.

The split is expected to be bitter — EU leaders will not want to make leaving their union seem easy or fruitful, to deter other countries that might be mulling a referendum of their own.

But after receiving the letter, Tusk appeared more like a downtrodden spouse, devastated by a looming divorce.

“There is no reason to pretend that this is a happy day, neither in Brussels nor in London. After all, most Europeans, including almost half the British voters, wish that we would stay together, not drift apart,” he said.

But on a more positive note, he said Brexit had made the 27 other nations in the EU more determined and united.

“And what can I add to this? We already miss you.”

The triggering of Article 50 starts the clock ticking on two years of talks between May’s government and the EU, which will involve everything from deals on trade, migration, education and healthcare.

In the House of Commons, May promised to represent all of the UK in the negotiations that are to come.

“When I sit around the negotiating table in the months ahead, I will represent every person in the whole United Kingdom — young and old, rich and poor, city, town, country and all the villages and hamlets in between. And yes, those EU nationals who have made this country their home.”

But May has vowed to weather the storm of Britain’s exit from the EU’s single market and customs union, essentially a free-trade zone that the country will no longer be a part of.

The EU is the UK’s biggest trading partner, and experts have warned that striking a comprehensive trade deal in two years will be unlikely. The two parties can, however, continue trade talks beyond this period.

Even if some terms of divorce are not agreed, the UK will fall out of the union on March 29, 2019. They can split earlier if both parties agree.

But May will have other Brexit battles to fight on her own soil. The Scottish parliament on Tuesday voted to seek another independence referendum, as Scotland voted overwhelmingly in favor of remaining part of the EU.

“Today the PM will take the UK over a cliff with no idea of the landing place,” the First Minister, Nicola Sturgeon said on Wednesday. “Scotland didn’t vote for it and out voice has been ignored,” she wrote on Twitter.

The UK government has also said it will reluctantly have to consider reintroducing direct rule in Northern Ireland, if talks there over restoring a power-sharing executive fail.