Shares
During trials Bill Kochevar grasped and lifted objects after having dozens of electrodes implanted in his brain and right arm. 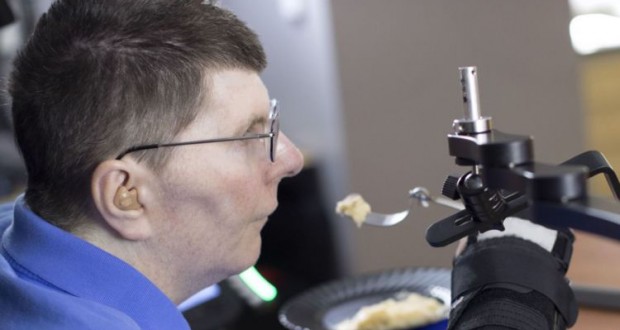 A quadriplegic man has had his right arm and hand brought back to life with the help of thought-control technology, Joinfo.com reports with reference to Sky News.

Bill Kochevar, 56, was paralysed below his shoulders in a cycling accident eight years ago but can now grasp and lift objects after having two pill-sized electrodes implanted in his brain.

The electrodes record the activity of brain neurons to generate signals that tell another device to stimulate muscles in the paralysed limb.

During trials held at Case Western Reserve University in Cleveland, Ohio, Mr Kochevar raised a mug of water to his lips and drank from a straw.

He also scooped forkfuls of mashed potato from a bowl.

Mr Kochevar, from Cleveland, said the technology was “better than I thought it would be”.

He said: “For somebody who’s been injured eight years and couldn’t move, being able to move just that little bit is awesome to me.”

The trials were part of the BrainGate2 study, which is exploring the safety and feasibility of using brain-computer interface systems to help people paralysed by spinal injuries.

In preparation, Mr Kochevar learned how to use his brain signals to move a virtual-reality arm on a computer screen.

After four months of practice, another 36 electrodes were implanted into his upper and lower right arm.

Pulses sent through the electrodes trigger muscles to regulate movement of the hand, wrist, arm, elbow and shoulder. 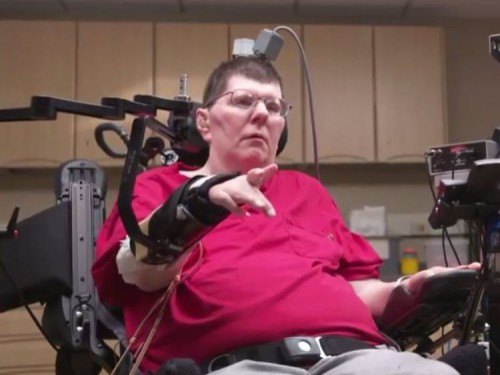 Mr Kochevar was fitted with a mobile support, which he also controls with his brain, to counterbalance the force of gravity.

The 56-year-old told researchers he was able to control the muscle activation system “without having to really concentrate hard at it”.

He is believed to be the first person in the world with quadriplegia to have arm and hand movement restored by two kinds of implant.

He said: “This is a major step toward restoring some independence.”