Shares
The most famous of all the dinosaurs just gained a new species — and a new look. 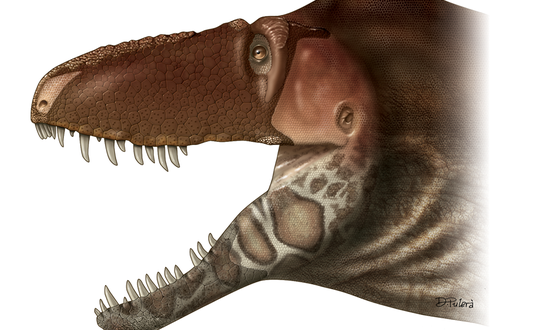 Unusually well-preserved fossils indicate the face of the newly discovered member of the tyrannosaur clan, Daspletosaurus horneri, was covered with a mask of large flat scales, with smaller patches of armor-like skin and sheaths of horn, Joinfo.com reports with reference to USA Today.

The skin was also “super-sensitive,” acting almost like a sixth sense and enabling them to better hunt and capture prey, said lead researcher, biologist Thomas Carr of Carthage College in Kenosha, Wis.

It also might have helped with dinosaur foreplay. The tyrannosaurs “might have rubbed their sensitive faces together as a vital part of pre-copulatory play,” the study said.

Scientists believe the new species and potentially all tyrannosaur faces, including the great T-Rex, shared remarkably similarities to modern-day crocodiles, according to the study, published Thursday in the peer-reviewed British journal Scientific Reports.

“Tyrannosaurs in the flesh are ubiquitous across all media, from museum galleries to Hollywood blockbusters, arguably making them the most iconic dinosaurs in modern culture,” the study said. It’s “ironic that the life appearance of the tyrannosaur face has not been rigorously studied.”

The animal evolved directly from a geologically older relative, D. torosus, in a rare form of evolution called “anagenesis,” where one species gradually morphs into a new one. A more common form of evolution occurs when an ancestral species splits into two or more descendant species.

The new species of tyrannosaur lived during the late Cretaceous period, approximately 66 to 100 million years ago. Scientists estimate the dinosaur was about 30 feet long, about the length of a city bus, and 7 feet tall. 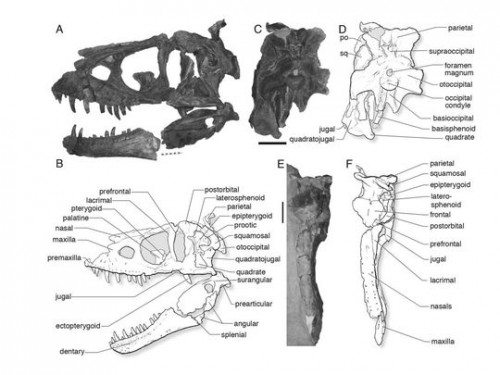 Photos and labeled line drawings of the skull of the new species of tyrannosaur dinosaur. (Photo: Scientific Reports)

The Daspletosaurus horneri fossils were found in western Montana, highlighting the excellent record of dinosaur finds in that state, said professor David Varricchio of Montana State University, who was part of the study. “Montana remains a wonderful place to explore the Cretaceous.”

The new species’s name is Latin for “Horner’s frightful lizard,” after the famed dinosaur paleontologist John R. “Jack” Horner, formerly curator of the Museum of the Rockies in Bozeman, Mont.