Shares
With its abundance of seals providing a ready-made diet, North Uist island in Scotland could soon find itself home to a whole colony of polar bears. 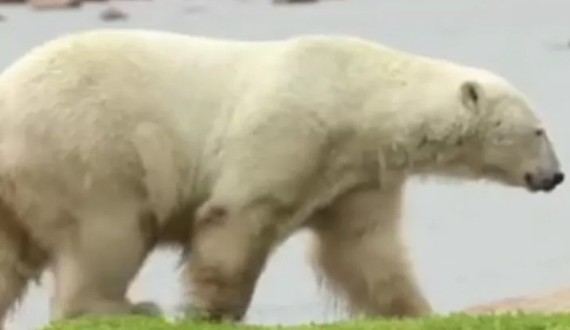 For scientists with the World Wildlife Fund (WWF) have discovered a polar bear living on an island in the Outer Hebrides, Joinfo.com reports with reference to Telegraph.

The images and video footage were captured by a dog walker on North Uist. Its authenticity has been verified by the WWF.

Scientists believe the bear may have been forced to head south after finding itself stranded on a melting sheet of ice that broke away from the Arctic ice cap.

Data tracking suggests more polar bears are likely to follow the same route in coming months and years as the ice cap continues to diminish.

With its abundance of seals providing a ready-made diet, North Uist island in Scotland could soon find itself home to a whole colony of polar bears. 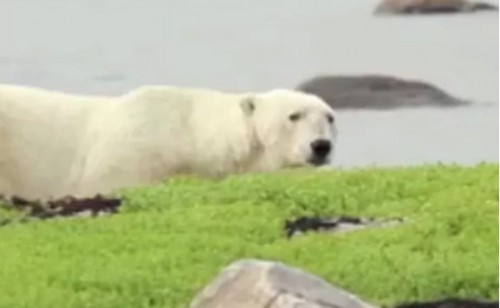 It’s not inconceivable, say scientists, that as the island becomes overcrowded, the bears could one day head south to Glasgow. Polar bears, the most carnivorous members of the bear family, would likely be able to survive by scavenging in the city’s bins for discarded haggis, kebabs and other meat products.

Satellite tracking technology showed that the polar bear started its journey in Svalbard in the Norwegian Arctic in January. But record declines in sea ice and unseasonably high temperatures forced it south in an attempt to adapt to the effects of climate change.

The polar bear, who has been given the name Lirpa Loof, which is Norwegian for ‘white and fluffy’, was then sighted on the North Uist beach.

Rod Downie, WWF Polar Programme Manager, said: “It may seem a million miles away but in fact Scotland is the Arctic’s closest neighbour.

“It’s less than 400 miles from the north of Scotland to the Arctic Circle. Some polar bears have been known to travel more than twice that distance, so this does not come as a major surprise to polar bear experts in the UK.

“Other arctic species, such as barnacle geese, also make the annual migration to Scotland’s shores.

“With continuing increases in Arctic temperatures and record declines in sea ice we can only predict that polar bears will continue to migrate to Scottish shores. The Arctic is in meltdown.”

Scientists are keeping the precise location of the polar bear secret to prevent sightseers flooding the island armed with cameras and inappropriate food, such as deep fried Mars Bars, to lure it into the open. It is feared that a number of monster spotters from Loch Ness may also make the journey.

It is not the first time polar bears have been found on Scottish shores. It is thought that polar bears once lived in Scottish Highlands. A skull dating back 18,000 years was discovered in 1927 by archaeologists looking for evidence of early human habitation

But current predictions suggest that by 2050, polar bear numbers may decline by 30 per cent due to the rapid loss of sea ice unless climate change is halted.  And it’s not just polar bears which are vulnerable, WWF’s Living Planet report 2016, found nearly one in six species are at risk of extinction from climate change.

To help fund projects that protect polar bears and their habitat and reduce the impacts of climate change the public can find out how to adopt a polar bear with WWF at https://www.wwf.org.uk/updates/polar-bear-found-in-scotland.