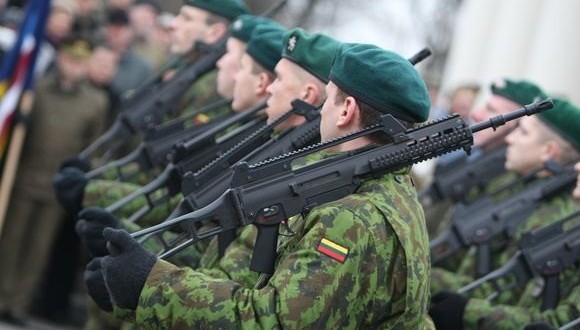 Russia is trying to create a false history that denies the Baltic states’ right to exist, with alarming parallels to its justifications for the annexation of Crimea in March 2014, top Lithuanian officials have said, Joinfo.com reports with reference to The Guardian.

The country’s defence minister and officials from the army’s department of strategic communication have told the Guardian that they are taking very seriously the threat of disinformation campaigns orchestrated by Moscow that aim to destabilise the region.

“Russia is a threat,” the defence minister, Raimundas Karoblis, said. “They are saying our capital Vilnius should not belong to Lithuania because between the first and second world wars it was occupied by Poland. It’s history of course, but Russia is using this pretext.

“Sometimes [the disinformation] is through [the government-run news agency] Sputnik, sometimes through their TV, but usually from politicians in the Duma.

“There are now reports that Klaipėda [Lithuania’s third largest city] never belonged to Lithuania; that it was the gift of Stalin after the second world war. There are real parallels with Crimea’s annexation [from Ukraine] … We are speaking of a danger to the territorial integrity of Lithuania.”

Sgt Tomas Ceponis, from the Lithuanian military’s department of strategic communication, said his team was monitoring disinformation, much of which bears similarities to the propaganda campaigns reported by Ukrainian specialists.

Lithuania fears the campaign to rewrite history could be an effort to prepare the ground for a possible attack with conventional weapons – what the military calls “kinetic operations”.

“Some of my colleagues from Ukraine told me there was a 12-year period of latent information operations, non-kinetic,” Ceponis said. “Then after, when conditions were set, they turned to kinetic operation.

“What is really a threat for us, is that we see they are working on a similar narrative for Lithuania, and they have been working on it for many years.”

The issue of how national history is interpreted is potentially a question of national survival for Lithuania, whose status has shifted over several centuries from a major regional power to a territory of another nation, to an independent but small and vulnerable state.

Ceponis said the Russians spent a lot of time and energy putting together a narrative in Crimea that incorporated a revival of the Tsarist-era term “Novorossia” or “New Russia”, to describe parts of eastern Ukraine. The term was embraced by Putin when he asserted Moscow’s right to use force there in 2014, but had first appeared nearly a decade earlier.

“In 2003, when they first talked about Novorossia, no one even cared about these comments, but now we can trace history back and see these articles,” Ceponis said.

The Lithuanian military says similar campaigns have been traced on TV and social media that question the existence of a separate Lithuanian state, lay claim to part of its territory, or bolster the idea that the country is oppressing ethnic Russians.

The former deputy chairman of the Duma, the lower house of the Russian parliament, Vladimir Zhirinovsky is among those who have challenged Lithuania’s right to exist.

His team has picked up on the creation of Facebook pages for imaginary “statelets” inside the Baltic area, reminiscent of the self-declared People’s Republic of Donbass and Luhansk in eastern Ukraine.

Some of the accounts may seem crude or absurd but if they are well presented, they can be very persuasive, Ceponis said. “You don’t need to lie 100%, just have to provide selective information, and they are really good at playing the game. Not everyone is a historian, a politician and for general citizens it can be hard to understand.

“We live in a democracy, which is why each of our citizens became a target for hostile propaganda,” he added.

Vilnius has long been nervous about a neighbour whose control it escaped only a quarter of a century ago. The authorities have already taken four television stations to court for their content, and had them temporarily suspended. Another key tactic is trying to educate citizens to identify propaganda for themselves, and exposing overt misinformation campaigns.

On the ground, Germany is to lead a battle group of 1,000 troops, including soldiers from the Netherlands, Belgium, Norway and Luxembourg, who will be stationed in Lithuania, amid growing concerns over Putin’s intentions in the Baltics. Nato battle groups led by America, Canada and Britain are also being stationed in Poland, Latvia and Estonia.

Karoblis said the situation was “terrifying” but that the troops were vital to send the message that Lithuania and others were “not alone”. He said: “If the worst-case scenario [were to happen] we will probably not get another chance if we surrender without a fight.”

He added: “In Kaliningrad [a Russian enclave bordering Poland and Lithuania on the Baltic Sea] they are building their capacities. It seems that they will have now a permanent middle-range missile system there that is capable of bringing nuclear weapons. It will cover the eastern part of Germany, or the south of Sweden, for example.

Ceponis said the west needed to step up its battle against Russian propaganda. “You have a saying ‘the road to hell is paved with good intentions’. If we lose the information war today, tomorrow we may be fighting with weapons.”