Shares
This is officially the most expensive jewel in the world. 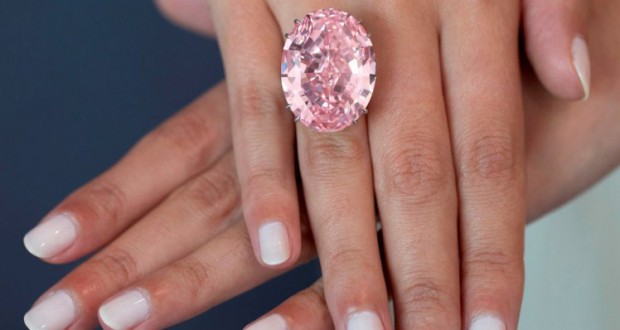 Known as the ‘Pink Star’, the stunning cut diamond has just been sold for $71.2 million (£57 million), setting a new world record. The diamond went well above its pre-sale estimate of $60 million, Joinfo.com reports with reference to Metro.

Three people competed by telephone over five minutes to make the winning bid, placed with Sotheby’s in Hong Kong today.

It had previously been ‘sold’ for an even higher price in Geneva, but the deal fell through when the buyer defaulted.

The gem is the largest flawless fancy (that’s a real technical term) vivid pink diamond ever graded by the Gemological Institute of America.

‘We’re very happy,’ Wong said. ‘I know there was a lot of talk about the economy in China not being as positive as it was a few years ago,’ but the results from its jewellery auction on Tuesday, which included nearly 200 other lots, were very strong, she said.

Wong said the company is not worried about another default because the bidders were vetted and have longstanding relationships with Sotheby’s.

Until now, the most expensive diamond ever sold at auction was the ‘Oppenheimer Blue,’ which fetched 56.8 million Swiss francs (then $57.6 million) last May.