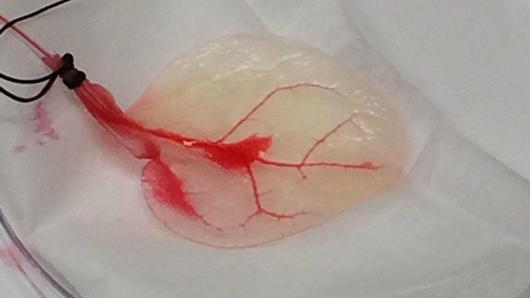 Researchers have turned to lab-growing human tissue as one way of meeting the high demand for tissue and organ transplants, Joinfo.com reports referring to CNBS News.

Their experiment may solve a serious limitation facing researchers attempting to grow human organs in laboratories: making functioning blood vessels. It is another example of “bio-inspired” engineering, where scientists look to designs in nature for insight on solving problems in the lab.

But current techniques, including 3-D printing, have great difficulty getting functioning blood vessels into lab-made tissue, and it remains one of the main factors that makes lab-grown tissue tough to use in the operating room.

Plants already have systems for delivering nutrients that are somewhat similar to the vascular systems found in humans, despite the deep biological differences between plant and animal tissue.

“Plants and animals exploit fundamentally different approaches to transporting fluids, chemicals, and macromolecules, yet there are surprising similarities in their vascular network structures,” the authors wrote in a study published last week in the journal Biomaterials.

The team first used detergents to flush the plant cell material out of a spinach leaf, leaving only a clear scaffold made up of cellulose. Cellulose is already used in some tissue engineering methods, the study noted.

They then seeded the cellulose with human tissue and blood cells, producing a lab-grown specimen that looks and functions like normal human heart tissue, as study co-author Joshua Gershlak said in the video below.

It is important to note that human treatments based on this experiment are likely several years away, as researcher Glenn Gaudette said in the above video.

But the researchers note in their study, more than “100,000 patients can be found on the donor waiting list at any given time and an average of 22 people die each day while waiting for a donor organ or tissue to become available.”

If further studies are successful, turning the leaves of a relatively abundant plant into functioning human flesh could prove a simple way to save countless lives.