Shares
A surgeon was pictured sleeping on the floor of the hospital on March 30 when he had just finished a 28 hour shift at a hospital in Dingyuan County, China

The man has since been praised on social media for his dedication to work, according to Daily Mail.

Some people are dedicated to their jobs and then there is this man.

This surgeon in China has been praised online after photos taken on March 30 emerged of him sleeping on a floor after performing 28 hours worth of surgery.

According to the People’s Daily Online’s social media account, as soon as the surgeries were over, the man named Luo Heng fell asleep on the floor.

The images were taken on March 30 at a hospital in Dingyuan County, China’s Anhui province. 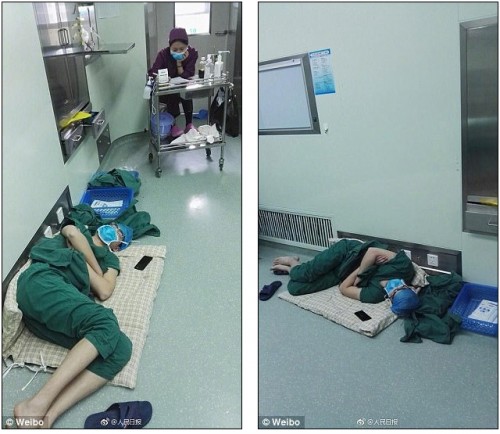 He worked through the night on two surgeries and then performed three more the following morning.

Reports say he had been working for 28 hours. He had performed five operations.

People on Chinese social media site Weibo have praise the surgeon for his dedication and hard work. While others have also raised concern about the number of decent breaks a doctor should have to ensure they are fully rested.

One user commented: ‘I salute you, you have worked hard.’

While another user said: ‘I hope the media do not promote this. A doctor is not only a career, but a doctor is also a person.’

And one user said: ‘The most charming man.’