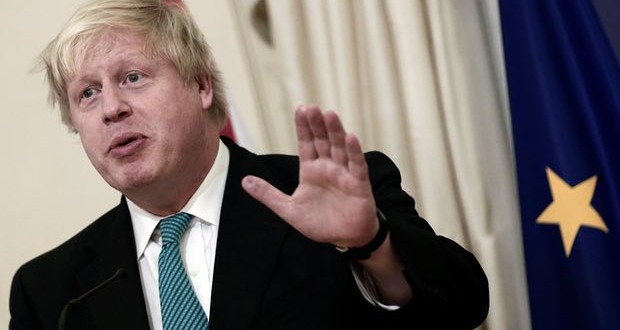 The British foreign secretary, Boris Johnson, has cancelled a planned trip to Moscow after the US launched missile strikes on Syria and in the wake of “Russia’s continued defence of the Assad regime”, Joinfo.com reports with reference to The Guardian.

Johnson had been due to fly to Russia on Monday for talks with his direct counterpart, the first such meeting since 2012. But the Foreign Office confirmed on Saturday that the foreign secretary would no longer make the trip because “developments in Syria have changed the situation fundamentally”.

Johnson said: “My priority is now to continue contact with the US and others in the run-up to the G7 meeting on 10-11 April – to build coordinated international support for a ceasefire on the ground and an intensified political process.

“We deplore Russia’s continued defence of the Assad regime even after the chemical weapons attack on innocent civilians. We call on Russia to do everything possible to bring about a political settlement in Syria and work with the rest of the international community to ensure that the shocking events of the last week are never repeated.”

His decision comes as the US appeared to back away from any wider military involvement in the Syrian conflict, less than 24 hours after launching Tomahawk missiles at a regime airbase. It did, however, say it had put Bashar al-Assad on notice that it would take further military action if he used chemical weapons again.

“The United States will no longer wait for Assad to use chemical weapons without any consequences. Those days are over,” the US ambassador to the UN, Nikki Haley, told a special session of the UN security council.

“The United States took a very measured step last night,” Haley added. “We are prepared to do more, but we hope that will not be necessary.”

However, the White House press secretary, Sean Spicer, refused to discuss any next steps – military or diplomatic – as the world struggled to understand Trump’s policy on the civil war.

Syrian warplanes were reported to have since taken off from the airbase that was targeted by the US, suggesting that the impact of the overnight attack had been minimal. The Syrian Observatory for Human Rights also said government aircraft had bombed the outskirts of Khan Sheikhun, the town targeted in Tuesday’s chemical weapons attack.