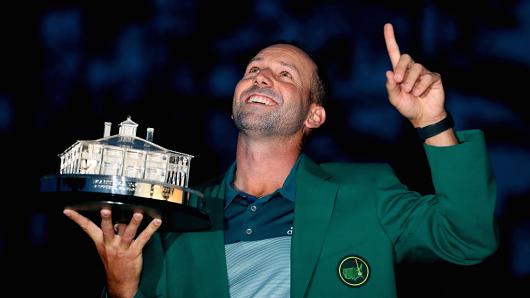 Spain’s Sergio Garcia ended nearly two decades of major disappointment when he beat England’s Justin Rose in a playoff to win the U.S. Masters on Sunday, donning the Green Jacket on the 60th birthday of his hero, the late Seve Ballesteros,Joinfo.com reports with reference to CNBC.

After 73 majors, four heartbreaking runner-up finishes and years of self doubt, Garcia finally delivered the long awaited title when his 10-foot birdie putt at the first extra hole dropped into the cup at the par-four 18th, triggering a massive cheer from a gallery that had been on the edge of their seats.

Deadlocked after nine holes, the two friends and rivals produced an enthralling back nine showdown worthy of any Masters champion.

Garcia and Rose finished tied on nine under par at the end of regulation and sent the year’s first major to a playoff when both missed birdie putts and settled for pars at the 72nd hole.

It marked the first Masters playoff since Adam Scott beat Angel Cabrera to become the first Australian to wear the Green Jacket in 2013 at Augusta National.