Shares
A team of researchers from Denmark, the United States and Canada made the discovery while studying a solar storm that reached Earth's northern latitudes on Feb. 19, 2014 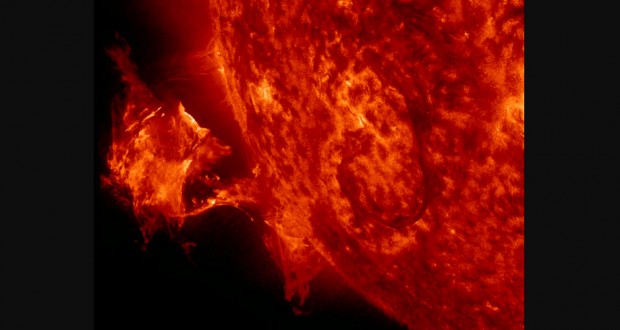 New research on solar storms finds that they not only can cause regions of excessive electrical charge in the upper atmosphere above Earth’s poles, they also can do the exact opposite: cause regions that are nearly depleted of electrically charged particles. The finding adds to our knowledge of how solar storms affect Earth and could possibly lead to improved radio communication and navigation systems for the Arctic, according to NASA.

A team of researchers from Denmark, the United States and Canada made the discovery while studying a solar storm that reached Earth on Feb. 19, 2014. The storm was observed to affect the ionosphere in all of Earth’s northern latitudes. Its effects on Greenland were documented by a network of global navigation satellite system, or GNSS, stations as well as geomagnetic observatories and other resources. Attila Komjathy of NASA’s Jet Propulsion Laboratory, Pasadena, California, developed software to process the GNSS data and helped with the data processing. The results were published in the journal Radio Science.

Solar storms often include an eruption on the sun called a coronal mass ejection, or CME. This is a vast cloud of electrically charged particles hurled into space that disturbs the interplanetary magnetic field in our solar system. When these particles and the magnetic disturbances encounter Earth’s magnetic field, they interact in a series of complex physical processes, and trigger perturbations in the Earth’s magnetic field. Those perturbations are called geomagnetic storms. The interactions may cause unstable patches of excess electrons in the ionosphere, an atmospheric region starting about 50 miles (80 kilometers) above Earth’s surface that already contains ions and electrons.

The 2014 geomagnetic storm was a result of two powerful Earth-directed CMEs. The storm initially produced patches of extra electrons in the ionosphere over northern Greenland, as usual. But just south of these patches, the scientists were surprised to find broad areas extending 300 to 600 miles (500 to 1,000 kilometers) where the electrons were “almost vacuumed out,” in the words of Per Hoeg of the National Space Research Institute at the Technical University of Denmark, Lyngby. These areas remained depleted of electrons for several days.

The electrons in the ionosphere normally reflect radio waves back to ground level, enabling long-distance radio communications. Both electron depletion and electron increases in this layer can possibly cause radio communications to fail, reduce the accuracy of GPS systems, damage satellites and harm electrical grids.

“We don’t know exactly what causes the depletion,” Komjathy said. “One possible explanation is that electrons are recombining with positively charged ions until there are no excess electrons. There could also be redistribution — electrons being displaced and pushed away from the region, not only horizontally but vertically.”

The paper is titled “Multiinstrument observations of a geomagnetic storm and its effects on the Arctic ionosphere: A case study of the 19 February 2014 storm.” Lead author Tibor Durgonics is a doctoral student at the Technical University of Denmark. Richard Langley (University of New Brunswick, Canada) provided data sets and interpretation.