Shares
Space organization finds that hydrogen erupts out of underground ocean on Enceladus, meaning it has the water, chemistry and energy sources life requires 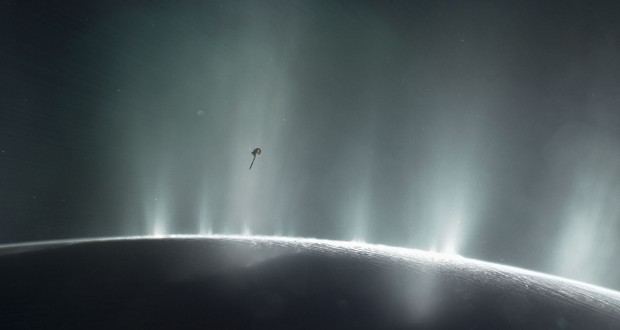 A tiny moon of Saturn has most of the conditions necessary for life, Nasa announced on Thursday, unveiling a discovery from an underground ocean that makes the world a leading candidate for organisms as humans know them, Joinfo.com reports with reference to The Guardian.

Scientists stressed that the discovery on a moon named Enceladus is not evidence that life has in fact developed on another world, but they have managed to establish the existence of the water, chemistry and energy sources that are necessary for it.

“We now know that Enceladus has almost all of the ingredients that you need to support life as we know it on Earth,” said Linda Spilker, a project scientist who said the finding essentially confirmed vents on the moon’s seafloor.

Chris Glein, another scientist involved in the project, said the discovery showed that the moon’s ocean contained a potential chemical feast for microbes. “We have made the first calorie count on an alien ocean,” he said.

Beneath its frozen surface, Enceladus has a saltwater ocean, and the hydrogen – produced in a reaction between heated water and rocks – indicates that the moon has active energy sources, possibly akin to the undersea vents that teem with life on planet Earth.

“We don’t know whether there’s life out there yet but right now we’re making a lot of progress,” said Thomas Zurbuchen, Nasa’s associate administrator.

The spacecraft Cassini detected the hydrogen in the fall of 2015, when it flew through a plume of vapor that had been spewed out through cracks in the moon’s icy surface. The flyby discovered water, ice, traces of methane, salts and other carbon compounds, the researchers said.

Their findings were revealed at a Nasa briefing on Thursday and in a paper published in the journal Science.

Cassini also found silicates and hydrogen, meaning there are energy sources beneath the moon’s surface, and the chemicals microbes are known to consume on Earth.

“This finding does not mean that life exists there, but it makes life more plausible and potentially quite abundant if a fraction of the hydrogen is used to drive biology,” said Jeffrey Kargel, a professor at the University of Arizona.

Andrew Coates, a professor of physics at University College London, added: “This distant moon now joins Mars and Europa as the best potential locations for life beyond Earth in our solar system.”

Nasa has found liquid water on Mars, but solar winds have for eons stripped away its atmosphere and the planet has dried out into its current irradiated state. Like Enceladus, Europa has an icy crust and an underground ocean. Nasa hopes to send a probe to the moon in the 2020s, complete with instruments to detect heat and penetrate ice in search of undersea vents. On Thursday the researchers also announced new evidence of plumes around Europa, and of one hot spot in particular on the moon.

Forming shapes like chimneys and geysers, Earth’s hydrothermal vents gush clouds of heated chemicals in the places that magma and seawater collide in great depths. The formations host whole ecosystems on the ocean floor, and microbes thrive there, using the energy created by these chemical reactions to power their own metabolisms.

Biologists have for decades studied the vents to learn about how life began on Earth about 4bn years ago – and how it might begin on an alien world where extreme temperatures and radiation do not stop evolution cold.

“If we knew that life had started independently in two places in our solar system, then we could be pretty confident that life also got started on some of the tens of billions of planets and moons around other stars in our galaxy,” said David Rothery, a professor of planetary geosciences at the Open University.

Cassini, which is running out of fuel, will end its 20-year mission to Saturn and its moons later this year, with a final journey between Saturn’s rings and then a fiery disintegration into the planet’s storms. The scientists plan to destroy Cassini on Saturn in part to prevent the spacecraft from crashing on Enceladus, where it could contaminate life there – if, that is, it exists.