A rare frog can help find cure for the flu 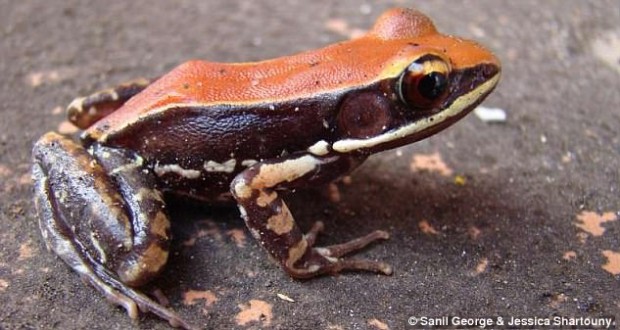 Scientists at Emory University found that the slime of a rare Indian frog has the power to destroy strains of human flu. It could be used to develop drugs that cure the flu, new research claims, Joinfo.com reports with reference to MailOnline.

Scientists have long known that frog mucus holds powerful peptides that defend them against bacteria.

But now a team of US scientists has found mucus secreted by the hydrophylax bahuvistara frog, native to southern India, can destroy many strains of human flu and protect mice against flu infection.

The researchers say anti-flu peptides could be useful when vaccines are unavailable, in the case of a new pandemic strain, or when circulating strains become resistant to current drugs.

Flu specialist and study co-author Joshy Jacob of Emory University School of Medicine in Atlanta said: ‘Different frogs make different peptides, depending on where their habitat is. You and I make host defence peptides ourselves.

‘It’s a natural innate immune mediator that all living organisms maintain. We just happened to find one that the frog makes that just happens to be effective against the H1 influenza type.’

Frogs have drawn the most attention as a source of peptides, because it’s relatively easy to isolate the peptides from their mucus.

Researchers from the Rajiv Gandhi Center for Biotechnology in Kerala, India, have been isolating peptides from their local frogs.

For the research, which appears in the journal Immunity, Dr Jacob and his colleagues screened 32 frog defence peptides against an influenza strain and found that four of them had flu-busting abilities.

He said: ‘I was almost knocked off my chair. In the beginning, I thought that when you do drug discovery, you have to go through thousands of drug candidates, even a million, before you get one or two hits. And here we did 32 peptides, and we had four hits.’

Dr Jacob and his colleagues named one of the antiviral peptides they identified urumin, after a whip-like sword called ‘urumi’ used in southern India centuries ago.

When delivered intra-nasally, urumin protected unvaccinated mice against a lethal dose of some flu viruses.

Urumin was specific for H1 strains of flu, such as the 2009 pandemic strain, and was not effective against other current strains such as H3N2.

Developing antimicrobial peptides into effective drugs has been a challenge in the past, partly because enzymes in the body can break them down.

Dr Jacob’s lab is now exploring ways to stabilise antiviral peptides such as urumin, as well as looking for frog-derived peptides that are active against other viruses like dengue and Zika.