French election: Macron to face Le Pen after first round

Shares
Macron topped Sunday’s first round with 23.9% of votes, slightly ahead of Le Pen with 21.4%, according to near-final results from the interior ministry. 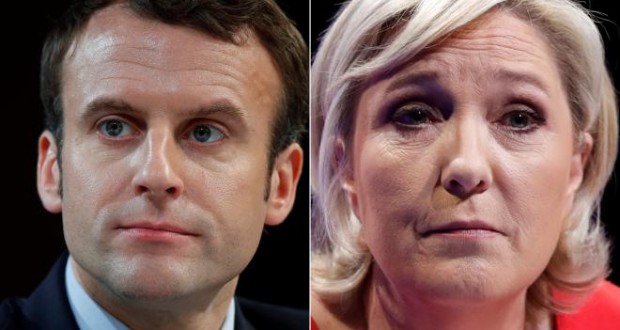 The independent centrist Emmanuel Macron has topped the first round of the French presidential election and according to projections will face the far-right Front National’s Marine Le Pen in a standoff marked by anti-establishment anger that knocked France’s traditional political parties out of the race, according to The Guardian.

Macron topped Sunday’s first round with 23.9% of votes, slightly ahead of Le Pen with 21.4%, according to near-final results from the interior ministry. Macron, 39, a political novice, now becomes the favourite to be elected as France’s next president. He is the youngest ever French presidential hopeful and has never run for election before.

After the UK’s vote to leave the European Union and the US vote for the political novice Donald Trump as president, the French presidential race is the latest election to shake up establishment politics by kicking out the figures that stood for the status quo.

The historic first-round result marked the rejection of the ruling political class – it was the first time since the postwar period that the traditional left and right ruling parties were both ejected from the race in the first round.

France’s two political outsiders – the progressive, pro-business and socially liberal Macron and the anti-immigration, anti-EU, far-right Le Pen – will now face off in a final round on 7 May that will redraw French politics and could define the future direction of Europe.

The Socialist prime minister Bernard Cazeneuve led appeals from across the political spectrum to support Macron in order to block Le Pen, who he said represented “regression and division” for France. The scandal-hit rightwing candidate François Fillon, who was knocked out of the race, said he would also vote for Macron because the Front National “has a history known for its violence and intolerance” and its economic and social programme would lead France to bankruptcy.

Macron, a former investment banker, who had been a chief adviser and then economy minister to the Socialist François Hollande, is not a member of any political party. He quit government last year and launched his own political movement, En Marche! (on the move), that was “neither left nor right”, promising to “revolutionise” what he called France’s vacuous and decaying political system.

Speaking in front of an ecstatic and raucous crowd in Paris, Macron said of his fledgling political movement: “In one year we have changed the face of French political life.” He said he represented “optimism and hope”. In a dig at Le Pen, he said he would be a president of “patriots” against the “nationalist threat”.

Le Pen’s place in the final round cements her party’s steady rise in French politics. The Front National has made steady gains in every election since she took over the leadership from her father, Jean-Marie Le Pen, in 2011. Le Pen ran a hardline campaign against immigration and promised to crack down on what she called “Islamic fundamentalism”. While Macron’s supporters at rallies waved EU flags and he hailed the positive role of the 27-country bloc, Le Pen told supporters “the EU will die”. She wants to leave the euro, return to the franc, exit the Schengen agreement and close French borders.

The central message of Marine Le Pen’s campaign was the staple of the Front National party since it was co-founded by her father in 1972: keeping France for the French. Le Pen promised to give priority to French people over non-nationals in jobs, housing and welfare, and would hold a referendum to cement this policy into the constitution. She said she would demand extra tax from companies that employed any kind of foreign worker.

In the final days of the first round campaign, she returned firmly to the main concern of her electorate: immigration. She went further than she had done before by promising to immediately suspend all legal immigration in order to reassess what she called the “uncontrollable situation” of foreigners coming into France. She promised a ban on religious symbols, including the Muslim headscarf, from all public places.

Both the rightwing Les Républicains party and the ruling leftwing Socialists, which have dominated government and French politics for decades, were knocked out of the race. They managed to take only around 25% of the vote between them.

The Macron-Le Pen final marks a redrawing of the political divide, away from the old left-right divide towards a contest between a liberal, pro-globalisation stance and “close the borders” nationalism. Le Pen has styled her election campaign as between her party’s “patriots” and the “globalists” she says Macron represents. As the geographer Christophe Guilluy has noted: “The rift between the global market’s winners and losers has replaced the old right-left split.”

From her northern heartland in the former coal-mining town of Hénin-Beaumont, Le Pen described herself as the “candidate of the people” against Macron, who she suggested represented the “arrogant elite” who hold “money as king”. She said that with her, France could “at last hold its head high”. She added: “It’s time to free the French people from the arrogant elite.”

Le Pen, who has no natural alliances with other parties – crucial for winning the second round – issued a call for all “patriots” to join her.