Shares
The Ukrainian city of Lviv – long noted for its Habsburg-era buildings and vibrant cafes – is in the throes of a trash crisis. Who is really to blame? 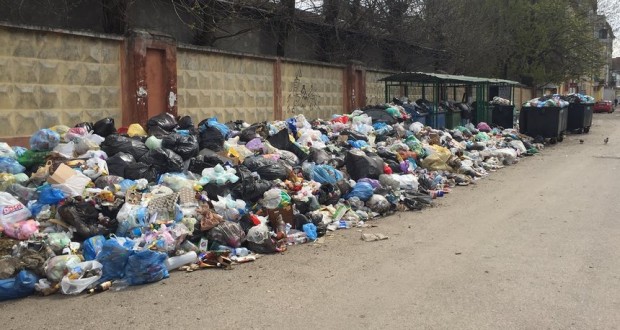 An enchanting city in western Ukraine, Lviv has gained a pleasant reputation for its rugged, Habsburg-era beauty and vibrant cafe scene. More recently, however, it has become known for something entirely different: heaping piles of trash, according to The Guardian.

For months, Lviv has struggled to properly dispose of the several hundred tonnes of waste it produces each day. Municipal officials say local trash collectors face restricted access to nearby landfills, leaving them few other places to turn with the city’s rubbish.

As a result, mountains of garbage routinely sprout up in neighbourhoods and courtyards across this regional capital of around 750,000 people. Today, about a third of Lviv’s waste collection sites are full, their contents often found overflowing across streets and pavements – and people worry about what the coming warm months will mean for the piles of waste.

Ivan Savytskyy says his courtyard was only cleared of garbage after he and his neighbours took turns hassling city hall. “If you call them, remind them, bug them – they’ll come take it away,” he said. “If you don’t, they won’t.”

Lviv has struggled with its rubbish since last May, when a fire tore through a major landfill outside the city, killing four people. Shortly after, other landfills began refusing the city’s waste, allegedly out of fear of a similar catastrophe repeating itself.

Activists and residents banded together to block – in some cases literally – the delivery of garbage to landfills near their towns. In other instances, claims Lviv’s mayor, Andriy Sadovyy, landfills have been ordered by federal authorities not to accept deliveries of trash from his city.

“We came to understand that we could become overtaken by garbage,” he says. “And that was probably the desired scenario.”

As is often the case in Ukraine – an ex-Soviet republic that has struggled to adopt a transparent democracy – politics is part of the picture. The waste issue has become a political football, with Sadovyy crying foul over a rubbish “blockade” allegedly manufactured by the central government in Kiev.

The Lviv mayor has become an outspoken critic of Ukrainian president Petro Poroshenko, who he claims is attempting to tarnish him and bully his political party, Samopomich (“Self Reliance”). While its nationwide support remains in single digits, Samopomich has built a loyal following and its members have staged high profile protests against the government.

Poroshenko and his administration have come under mounting criticism from both political opponents and much of the Ukrainian public for its perceived failure to root out corruption and crack down on a venal oligarchy.

“The logic is very simple: if you want to influence a political party, you pressure its leader,” Sadovyy says. “This is pressure on me personally so that I change my position and force my colleagues to vote in a way that’s suitable for the presidential administration.”

Others dismiss such claims. Sadovyy’s opponents say he is playing politics to cover for city hall’s incompetence, particularly its failure to seek alternative methods of rubbish disposal before last year’s fire at the landfill in the village of Hrybovychi.

Oleh Synyutka, the presidentially appointed governor of the Lviv region, believes the city is artificially prolonging the problem, accusing it of deliberately sabotaging trash collection and failing to properly negotiate deals with other landfills.

Whatever the truth, Lviv’s garbage fiasco has captured the country’s attention and posed a fresh policy challenge to a city that casts itself as a progressive-minded example for the rest of Ukraine. Trash is a national issue. Chronic underfunding from both the state budget and investors has resulted in the lack of an efficient waste management strategy. So vexing is the situation that officials have floated the idea of sending waste into the Chernobyl Exclusion Zone, although such proposals are unlikely to gain significant traction.

A two-year deal has just been struck between the Lviv regional administration and nearby towns and cities to accept garbage, while the city awaits new waste processing plant, funded by the French government and the European Investment Bank, expected to begin construction this year.

Recycling is uncommon. A staggering 95% of solid waste is buried throughout the country; by contrast, EU countries recycle more than 40% of their waste.

“In Ukraine, when we’re thinking about which direction to head into, it’s very important to understand where Europe is already heading,” says Iryna Myronova, an activist with Zero Waste Lviv.

In recent months, the group has organised social awareness campaigns challenging local citizens to produce less rubbish. Some cafes are joining in by offering discounts to customers who bring their own containers, or by eliminating sugar packets and plastic straws.

Environmentally conscious behaviour is becoming more widespread among a generation of educated youth. Many are well travelled and exposed to European practices and standards of living. The EU’s expected establishment of a visa-free regime with Ukraine later this summer will surely prolong this trend.

“For them it’s natural,” says Andriy Moskalenko, Lviv’s deputy mayor for development. “It’s not the kind of thing they’ll have to be told to by the local administration, or some other organisation.”

Meanwhile, Savytskyy and other residents of Lviv face further uncertainty. “This problem will remain the way it is until the bureaucrats sort out their interests among themselves,” he says.