Shares
The USS Michigan -- a guided-missile submarine -- arrived in South Korea for what a US defense official described as a show of force amid tensions between the US and North Korea. 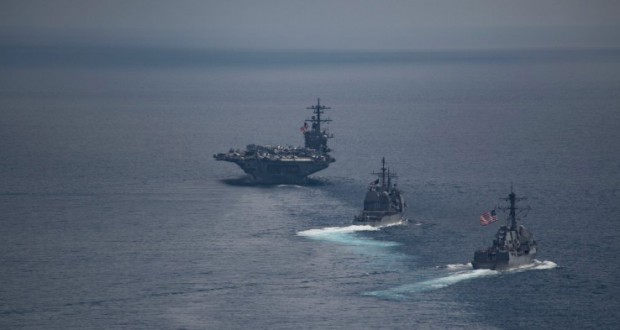 The US Navy sub arrived in the port city of Busan, South Korea, on the same day that North Korea celebrates the 85th anniversary of the founding of the Korean People’s Army, according to CNN.

A statement from US Naval Forces Korea called the sub’s visit “routine” and said it was a chance to highlight the alliance between the US and South Korean navies.

While the USS Michigan is not expected to take part in the joint exercises, its presence in the region is meant to send a strong message to Pyongyang.

US President Donald Trump told Fox Business Network’s Maria Bartiromo earlier this month that the US was sending an “armada” with submarines to the region.

“We are sending an armada. Very powerful,” Trump told Bartiromo. “We have submarines. Very powerful. Far more powerful than the aircraft carrier. That I can tell you.”

Armed with tactical missiles and equipped with superior communications capabilities, the Michigan is one of four US Navy subs that began service as a ballistic missile submarine, loaded with nuclear missiles as part of the US strategic nuclear deterrent.

In the 2000s the Navy converted four of the Ohio-class subs into land-attack platforms armed with conventional weapons.

Each of the four submarines can carry up to 154 Tomahawk cruise missiles. They are also outfitted to stealthily deploy up to 66 Navy SEALs or other special operations troops and their equipment.

The Michigan could be deployed in the Sea of Japan, also known as the East Sea, off the Korean Peninsula, said Carl Schuster, a Hawaii Pacific University professor and former director of operations at the US Pacific Command’s Joint Intelligence Center.

“Nuclear submarines prefer to operate in water over 100 fathoms deep (600 feet). Not always possible but they like having a lot of vertical space to duck and dodge in if they encounter anything unpleasant,” Schuster told CNN.

The 560-foot-long, 18,000-ton Michigan is one of four converted Ohio-class subs, joining the USS Ohio, USS Florida and USS Georgia.

The Michigan’s visit to Busan comes after North Korea on Sunday threatened to sink the American aircraft carrier USS Carl Vinson, which is beginning joint drills with two Japanese destroyers in the western Pacific Ocean.

The Vinson will be joined by the Ashigara and Samidare destroyers in “tactical training” drills near the Philippines, the Japan Maritime Self Defense Force said.

North Korea’s state-run newspaper Rodong Sinmun said in an editorial the country is ready to illustrate its “military force” by sinking a “nuclear-powered aircraft carrier with a single strike.”

The North Korean state newspaper claimed to have weaponry that “can reach continental US and Asia Pacific region” and the “absolute weapon,” or a nuclear hydrogen bomb. CNN cannot independently verify the newspaper’s claims.