Shares
Ivanka Trump was in Germany on Tuesday on her first international trip as a member of her father's presidential team. 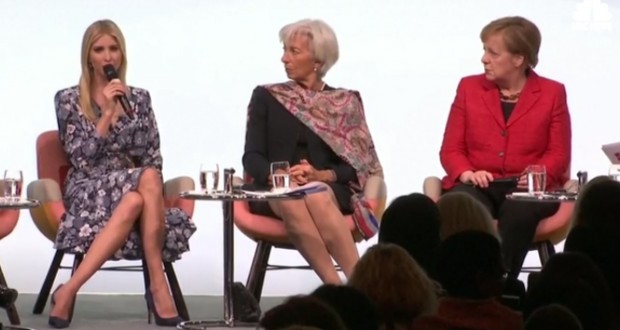 In doing so, the billionaire’s daughter stepped into a land that prides itself on meritocracy, Alexander Smith writes in an article for NBC News.

This is a country run by Angela Merkel, a veteran politician with a doctorate in quantum chemistry: someone who grew up in communist East Germany, was elected German leader three times, and who is regularly referred to as the most powerful woman on the planet.

Alongside her husband, senior presidential adviser Jared Kushner, 35-year-old Ivanka Trump has emerged as one of the key powerbrokers in what has become a distinctly family-oriented White House.

The first daughter traveled to the German capital, Berlin, on Tuesday after being invited by Merkel to participate in a panel discussion at the Women20 summit — an international event that aims to “promote women’s economic empowerment.” She arrived having become a prominent champion of working women, and after co-writing an article on the importance of the economic empowerment of women that appeared in the Financial Times newspaper.

While Ivanka Trump was in Berlin to promote women, the president himself was front and center during a panel discussion at the summit. The first daughter defended Donald Trump after a handful of attendees booed and groaned when she mentioned his name, saying he had encouraged “thousands” of women who worked for him.

“As a daughter, I can speak on a very personal level knowing that he encouraged and enabled me to thrive,” she said. “I don’t take that lightly as a parent now myself. And there was no difference for me and my brothers.”

Some commentators have speculated Merkel’s personal invitation to Trump was the German leader’s way of opening a channel to President Donald Trump, after an awkward meeting last month in which he appeared to decline her handshake.

But many German women do not share their leader’s welcoming spirit.

“I think it’s outrageous,” Meyer, the creative director, told NBC News on Monday. “Why does she have the power and the position to meet Angela Merkel?”

Meyer stopped to chat with NBC News before cycling to an appointment along one of Berlin’s wide, cobbled streets, where bikes and trams are given equal billing alongside compact European cars and tourist buses.

“It’s not clear exactly what her position is,” Meyer added, referring to Ivanka Trump’s role as an unpaid presidential adviser. “She obviously has more power than what her official role suggests.”

As well as her presidential duties, she still owns an eponymous clothing and jewelry line.

Insofar that Wednesday’s summit is about women in business, she is a good fit given her previous experience, according to 35-year-old Sandra Toepke.

But “on a political level — I guess not,” said Toepke, who works at the International Film Festival and spoke while walking her dog near Berlin’s Alexanderplatz.

“It’s pure nepotism that she’s in that position,” she added. “She’s partaking in negotiations at the White House and has security clearance.”

Lea May, a 22-year-old medical student walking on her way to class, added: “I just don’t know if she’s really into politics like Angela is.”

That a number of successful, professional woman in Berlin expressed dismay that Ivanka Trump was joining such accomplished set should perhaps not come as a surprise.

President Donald Trump is deeply unpopular in Europe but particularly so in Germany, where just 6 percent of people said they had confidence in him when it came to world affairs, according to a Pew study last year.

Germany also has a far higher rate of intergenerational social mobility than the United States, according to a study of OECD countries in 2015. This means the future salaries of German children are less dependent on what their parents bank — they make their own way.

Merkel, 62, fits this mold. The daughter of a pastor and a teacher, she was born in the West German city of Hamburg but moved to the rural, communist East after her father was posted to a church there. She later earned a doctorate in quantum chemistry and worked at a science academy. After the fall of the Berlin Wall, she climbed up the ranks of the center-right CDU, the political party she now leads.

“It’s ridiculous, what’s happening in U.S. politics,” said Thyra Guenther-Luebbers, a 21-year-old college student who’s also interning at an art gallery in the German capital. “It’s something that’s never going to happen in Germany or anywhere else in Europe.”

Taking a stroll down the Unter den Linden boulevard, Guenther-Luebbers gave a similar view of Ivanka Trump: Would she be so successful if it weren’t for her last name? “I don’t think so.”

That’s not to say that everyone on Tuesday’s panel is elected. Among the high-profile guests is Queen Máxima of the Netherlands, who is married to the country’s king. Like Ivanka Trump, she too has a background in business, working in banking before meeting her prince.

It would also be inaccurate to say everyone in Berlin shared dislike for Ivanka Trump and her family-boosted resume.

“I like her because she has the ability to influence Donald Trump,” said 68-year-old Molly Schultz, who runs a book stall outside the Humboldt University of Berlin. “It doesn’t matter so much to me that she isn’t so qualified.”

The ability to influence her father — or at least be a significant voice in his retinue — is something that appears to have been seized upon by Merkel.

The German leader endured an excruciating first official visit to the Trump White House last month, when the president appeared to decline to shake her hand for the cameras. In 2015, the president said Merkel was “insane” to relax Germany’s borders to welcome migrants fleeing war and persecution in the Middle East and Africa. (Although the same year he also called her “probably the greatest leader in the world today.”)

During Merkel’s visit to Washington last month, some political commentators criticized the decision to seat her next to Ivanka Trump at an official meeting with business leaders, again citing Ivanka Trump’s lack of credentials. A photo of Merkel looking at her neighbor was described by Politico as “a look of bewilderment tinged with disdain enveloping her face.”

The key relation btw #Germany & #USA is a serious matter. It shall not be family business. I disagree with #Ivanka #Trump presence. #Merkel pic.twitter.com/HcqRBYSl05

But it was off the back of this meeting that Merkel invited Ivanka Trump to Berlin, perhaps eager to nurture an ally in a new and unknown White House. In return, the president’s daughter would likely get to increase her international profile and champion a cause she says has long since been close to her heart.

While in Berlin, Ivanka Trump will also visit the Memorial to the Murdered Jews of Europe.

In spite of her schedule, editorials and clear hard work, nearly everybody NBC News spoke to here remained unconvinced by their American guest.

“Everybody is someone’s daughter but the question is, ‘Is she qualified for the job?’ And I don’t think being the daughter of Trump qualifies you for this job, you know?” said 33-year-old sports science student Jennifer Benz.