Shares
NASA's Cassini spacecraft has survived an unprecedented trip between Saturn and its rings, and has amazing pictures to show for it. 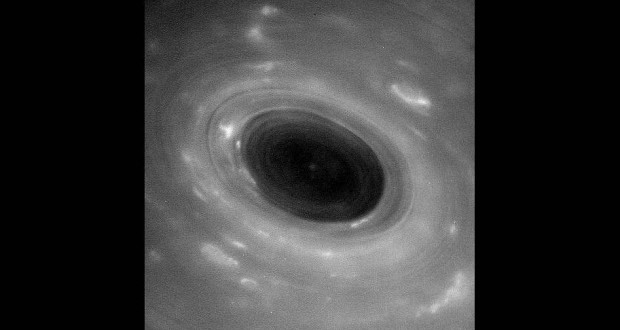 Flight controllers regained contact with Cassini on Thursday, a day after it became the first craft to cross this hazardous region. The rings are made up of countless icy particles, any of which could have smacked Cassini. The spacecraft’s big dish antenna served as a shield as it hurtled through the narrow gap, temporarily cutting off communications, according to ABC News.

Cassini skimmed 1,900 miles (3,100 kilometers) above Saturn’s cloud tops, closer than ever before, and came within 200 miles (320 kilometers) of the innermost visible ring. Scientists say the pictures show details never seen before — there’s an incredible close-up, for instance, of the gigantic swirling hurricane at Saturn’s north pole.

After 13 years of Cassini orbiting the planet, “Saturn continues to surprise us,” Pitesky said.

Given their importance, data from the crossing are being sent to Earth twice, to make certain nothing is lost. It takes more than an hour for the signals to travel the approximately 1 billion miles (1.6 billion kilometers) between Saturn and Earth.

Twenty-one more crossings are planned — about one a week — before Cassini’s fatal plunge in mid-September. The next one is Tuesday. Some of those passages will bring Cassini even closer to the planet as well as the innermost D ring. The gap between the rings and the top of Saturn’s atmosphere is between 1,200 and 1,500 miles across (1,900 to 2,400 kilometers).

While risky, this 4 1/2-month grand finale is expected to yield a treasure trove of science. There’s little to lose, even if the spacecraft is lost, given that its fuel tank is practically empty, according to NASA.

Cassini was launched in 1997 from Cape Canaveral, Florida, and reached Saturn in 2004.