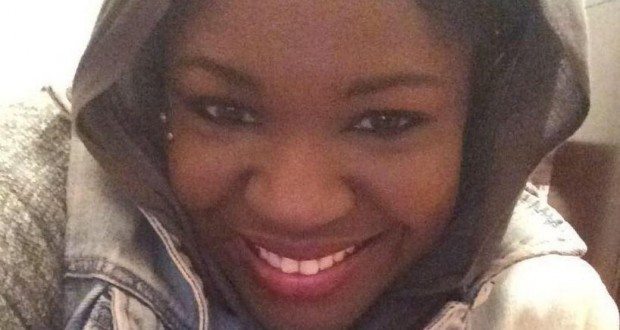 Large amounts of homework can be a source of stress for kids – and one mum has finally had enough and has written to her child’s school to tell them.

Mum-of-two Bunmi Laditan has struck a chord with parents after hitting out at the amount of work her 10-year-old daughter Maya is set each week, according to The Sun.

In a post that has been shared thousands of times on Facebook, the Quebec-based American blogger, wrote: “Over the past four years I’ve noticed her getting more and more stressed when it comes to school.

“And by stressed I mean chest pains, waking up early, and dreading school in general.

“She’s in school from 8.15am to 4pm daily so someone please explain to me why she should have two to three hours of homework to do every night?”

Bunmi shared how “junior workaholic” Maya is not behind academically, but they were forced to consult with a tutor and therapist over the stress she felt from the workload.

The professionals suggested that her workload is lightened, and Bunmi decided to take the matter to the school.

She wrote: “Doing two to three hours of homework after getting home at 4.30pm is leaving little time for her to just be a child and enjoy family time and we’d like to avoid her sinking into a depression over this.

“She’s been very stressed and is starting to have physical symptoms such as chest pain and waking up at 4am worrying about her school workload.” 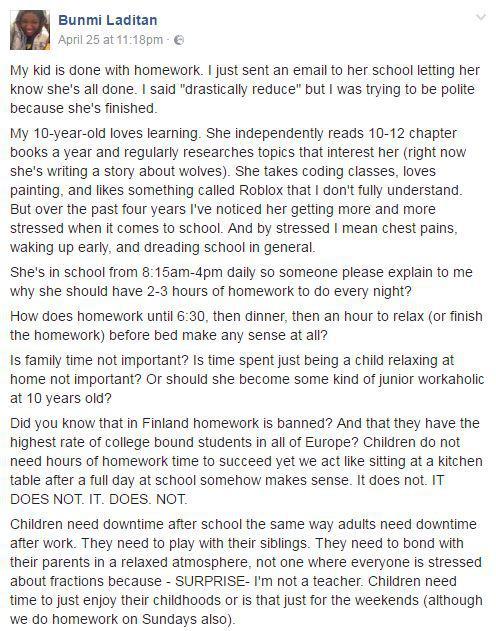 The passionate mum argued that children don’t need hours of homework a night to succeed and she would much rather Maya was kind and happy.

She said: “I don’t care if she goes to Harvard one day. I just want her to be intelligent, well-rounded, kind, inspired, charitable, spiritual and have balance in her life.

“I want her to be mentally and emotionally healthy.”

Many have agreed with post and shown support for her views.

One said: “Thanks for shining more light on this! Change is possible if folks know the facts and speak up.” 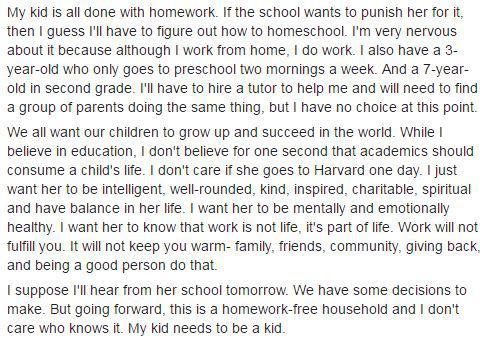 Another commented: “They have all their lives to deal with the stress of work, so let’s let them just enjoy themselves for a while.”

Typical levels of homework for primary school kids aged seven to 11 in the UK is currently around half an hour a night, rising to up to 90 minutes a night for those 11-14.

Bunmi isn’t the only one to have taken a stand against heavy burdens of homework.

A leading parenting expert Dr Justin Coulson made the bold decision to ban his six daughters from doing school work after hours – even thought they “absolutely love it”.

It may sound controversial, but Justin is not alone in his views. Match of the Day host Gary Lineker also recently called for a ban on ‘stressful’ homework.