Shares
European Council President Donald Tusk has called on the UK to come up with a "serious response" on what will happen to EU citizens in Britain after Brexit. 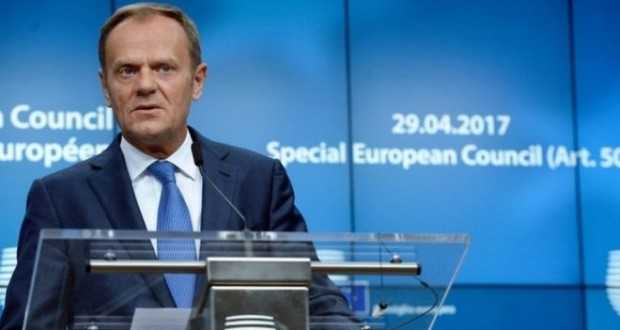 “We need guarantees,” Tusk said in Brussels as 27 EU leaders backed the bloc’s Brexit negotiating guidelines, according to the BBC.

The rights of EU citizens to live, work and study in the UK is one of three topics they want dealt with in the first phase of Brexit talks.

Negotiations will start after the UK election on 8 June.

Mr Tusk put citizens’ rights centre stage at a news conference after EU leaders – minus UK PM Theresa May – nodded through the guidelines in a matter of minutes.

“Over the past weeks, we have repeatedly heard from our British friends, also during my visit in London, that they are ready to agree on this issue quickly,” he said.

“But I would like to state very clearly that we need real guarantees for our people to live, work and study in the UK.

“The same goes for the Brits,” living on the European continent, he continued.

The EU’s negotiating guidelines, first proposed by Mr Tusk in March, list citizens’ residency rights, settling Britain’s financial commitments to the EU and avoiding a “hard” border between the Irish Republic and Northern Ireland as the three top issues needing agreement in what are termed “separation talks”.

Only once “sufficient progress” is made on these topics can talks touch on the UK’s future relationship, including any trade deal, with the EU.

The UK government, however, has pushed for parallel negotiations on trade.

Speaking after the summit, European Commission President Jean-Claude Juncker again stressed that separation talks could not run in parallel with talks on a future trade deal with the UK, backing the line taken by German Chancellor Angela Merkel as she arrived in Brussels.

EU officials said leaders burst into applause as the negotiating stance was waved through at the summit.

EU leaders and officials were keen to stress the EU’s unified position on Brexit. Chief negotiator, Michel Barnier, said: “We are ready… we are together.”