Shares
China's first large "homegrown" airliner made its maiden flight Friday in a major challenge to Western dominance of the skies. 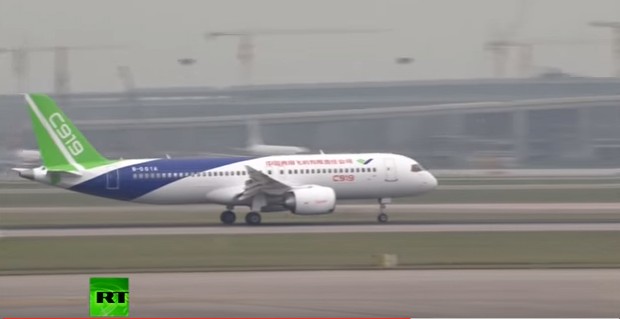 The C919 jet was built at a reported development cost of $8.6 billion. It has passed a series of technical and safety tests since rolling off the production line in 2015,Joinfo.com reports with reference to NBC News.

After the 90-minute journey was over, the test pilots left the aircraft smiling, wearing orange overalls with the Chinese flag.

The official Xinhua News Agency said the flight meant China had become “one of the world’s top makers of jumbo aircraft,” becoming the fourth large jet producer after the U.S., Europe and Russia.

The C919 carries “the will of the state, the dream of the Chinese nation and the expectations of the Chinese people,” said Jin Zhuanglong, chairman of the state-run Commercial Aircraft Corporation of China (COMAC). He added the project is in line with the spirit of “aeronautical patriotism.”

The 168-seat jet has a flying range of 3,000 miles — which is the market segment dominated by the popular Boeing 737 and Airbus A320. It has been in development for seven years.

“China wanted to build a homegrown airliner so it would no longer relinquish its lucrative large commercial airplane market to foreign companies,” said Derek Levine, author of “The Dragon Takes Flight,” a book which traces China’s effort in building the C919.

However, Levine said the project “has more to do with nationalism than commercial intent,” estimating that only 30 percent of the plane is Chinese-made, with most key components from engines to avionics coming from U.S. companies.

Although China has lagged behind its Western rivals in aircraft development, it boasts the world’s fastest-growing aviation market, which will eventually overtake the United States.

Boeing has projected that China’s fast-expanding middle class will create the first $1 trillion air travel market, needing about 7,000 extra aircraft over the next 20 years — about 30 percent of the world’s total demand.

With the offer of low-interest loans, China can encourage its state-controlled airlines to purchase the C919 or a smaller homegrown regional jet, according to Levine. He also noted that the C919 has already received 566 orders.

COMAC forecasts the sale of more than 2,000 C919 jetliners within the next 20 years.

Reflecting the importance of the Chinese market — which buys more than 25 percent of Boeing jets and supports 150,000 U.S. jobs — the American firm opened its first overseas finishing center in China last March. This follows the move by its chief rival Airbus to set up a final assembly plant in China in 2008.

“Boeing has a long-term view and strategy for the China market,” said John Burns, president of Boeing China. “We are a supplier, customer, competitor and business partner to China’s aviation industry.”

He added: “COMAC is a widely respected company and their products will compete in the global aviation airplane industry … at times we will both compete and collaborate with each other.”

Airbus also “welcomes” the competition brought by the C919 “which is good for the development of the industry,” said Amelia Xu, spokeswoman for Airbus China.

Levine said the Western giants had good reason to be sanguine about the C919’s development.

“The plane will not pose as a threat to Boeing or Airbus,” he said. “By the time the C919 is ready to debut, it will be approximately 15 years behind the newer Boeing and Airbus planes.”

In addition, the Federal Aviation Administration (FAA) has also not given airworthiness certification, “thus limiting the plane’s access to overseas markets,” Levine said.

“The expectation is that C919 will build a derivative that will meet FAA standards, which aviation experts believe will take [another] seven years,” he added.

China’s C919 “will not break the market monopoly” of Boeing and Airbus, concedes Professor Gao Yuanyang of Beihang University, China’s leading school of aeronautics and astronautics.

“The large aircraft market can definitely accommodate C919 to form a A+B+c market structure,” Gao told NBC News, noting that the small letter “c” represents the Chinese jet in a market that will continue to be dominated by Airbus and Boeing.

But Gao sees China’s “rapid growth in the foreseeable 20 years.” The C919 “clearly represents the hope to retain China’s huge share of the global aviation market at least partially in China,” he said.