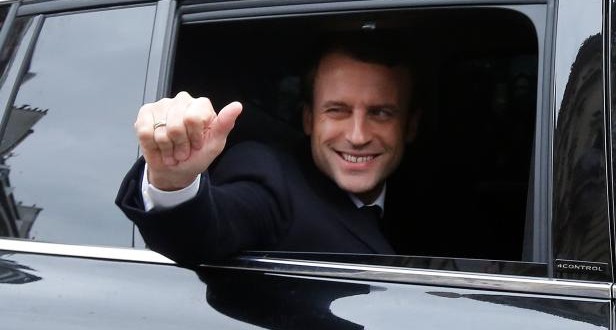 Emmanuel Macron was elected president of France on Sunday with a business-friendly vision of European integration, defeating Marine Le Pen, a far-right nationalist who threatened to take France out of the European Union, early projections showed, according to Reuters.

The centrist’s emphatic victory, which also smashed the dominance of France’s mainstream parties, will bring huge relief to European allies who had feared another populist upheaval to follow Britain’s vote to quit the EU and Donald Trump’s election as U.S. president.

Five projections, issued within minutes of polling stations closing at 8 p.m. (2 p.m. ET), showed Macron beating Le Pen by around 65 percent to 35 – a gap wider than the 20 or so percentage points that pre-election surveys had pointed to.

Even so, it was a record performance for the National Front, a party whose anti-immigrant policies until recently made it a pariah in French politics, and underlined the scale of the divisions that Macron must now try to heal.

Le Pen’s high-spending, anti-globalization ‘France-first’ policies may have unnerved financial markets but they appealed to many poorer members of society against a background of high unemployment, social tensions and security concerns.

Macron’s immediate challenge will be to secure a majority in next month’s parliamentary election for En Marche! (Onwards!), his political movement that is barely a year old, in order to implement his program.

The 39-year-old former investment banker, who served for two years as economy minister but has never previously held elected office, will become France’s youngest leader since Napoleon with a promise to transcend outdated left-right divisions.

At least one opinion poll published in the run-up to the second round has indicated that the majority he needs could be within reach.

Despite having served briefly as economy minister in President Francois Hollande’s deeply unpopular Socialist government, Macron managed to portray himself as the man to recast a political landscape moulded by the left-right divisions of the last century.

Socialist Prime Minister Bernard Cazeneuze said France had chosen to retain its place at the heart of Europe.

Shortly after the first projections were published, Le Pen, 48, said she had congratulated Macron. But she defiantly claimed the mantle of France’s main opposition in calling on “all patriots to join us” in constituting a “new political force”.

Her deputy said this new force would not be called “National Front”.

When he moves into the Elysee Palace after his inauguration next weekend, Macron will become the eighth – and youngest – president of France’s Fifth Republic.

He plans to blend a big reduction in public spending and a relaxation of labor laws with greater investment in training.

A European integrationist and pro-NATO, he is orthodox in foreign and defense policy and shows no sign of wishing to change France’s traditional alliances or re-shape its military and peace-keeping roles in the Middle East and Africa.

His election also represents a long-awaited generational change in French politics that have been dominated by the same faces for years.

He will be the youngest leader in the current Group of Seven (G7) major nations and has elicited comparisons with youthful leaders past and present, from Canadian Prime Minister Justin Trudeau to British ex-premier Tony Blair and even President John F. Kennedy in the United States.