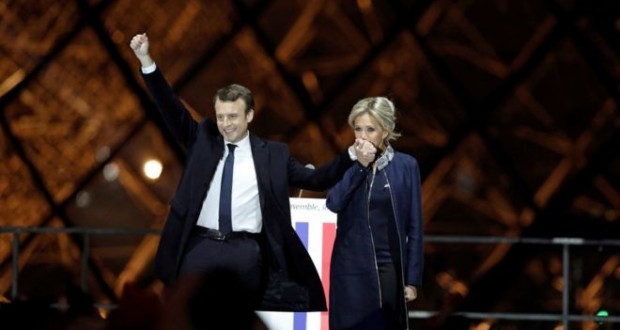 First things first: theirs is not a common relationship. That is paraphrased from words Mr Macron himself said on the couple’s wedding day: that they were “not quite common, a couple not quite normal – not that I like this adjective very much – but a couple that exists”, according to the BBC.

There is an age gap of 24 years between the pair – the same as that between Donald and Melania Trump. The couple, he now 39 and she now 64, met when she was his drama teacher.

The 15-year-old Emmanuel was, by all accounts, intellectually precocious. He was a pupil at a private Jesuit school in Amiens where, she later said, he “had a relationship of equals with other adults” rather than acting and speaking like a teenager.

She continued: “I was totally overcome by the intelligence of this boy.”

Born Brigitte Trogneux, the heir to a chocolatier company known for its macaroons, the drama teacher was married to banker André Auzière at the time and had three children.

Emmanuel’s parents realised their son was in love but it appears they did not suspect who the target of his affections was.

Instead, biographer Anne Fulda has written, they thought he had a crush on Laurence Auzière, a girl in his class at school. It was, in fact, her mum he was falling for.

When his parents found out, the account continues, they asked her to stay away from him until he was 18. “I can’t promise anything,” she said.

By 17, Emmanuel had told his now-wife he would marry her some day. It was a decade later, in 2007, that he made good on that promise.

Now Mr Macron’s mother says she sees Brigitte as “more of a friend” than a daughter-in-law.

Laurence has since become one of her stepfather’s most prominent supporters, showing up at his last rally in Paris, for instance. Another stepchild, Tiphaine, 32, is a lawyer who worked on his campaign.

Members of the family were on stage with the Macrons when they celebrated the results of Sunday’s vote at the Louvre in Paris.

The president-elect has three stepchildren and, through them, seven grandchildren.

Mrs Macron resigned from her teaching job after her husband became the economy minister, and she became his trusted adviser.

She is credited with influencing his views on women in politics. He has promised that half of all the candidates running for his En Marche (On The Move) party in June’s National Assembly elections will be women.

And he has said he wants to formalise the role of first lady. In an interview with Vanity Fair last month, he said: “If I am elected – no, sorry, when we are elected – she will be there, with a role and a place.”

As a former teacher, she may look to help young people as first lady. Exactly how remains to be seen.

Mr Macron has proposed that the role will not carry a salary and that she will shape it: “She will have an existence, she will have a voice there, a view on things. She will be at my side, as she has always been, but she will also have a public role.”

Some French cartoons joke at her expense, depicting Mr Macron as a student taking instructions from her. And his opponent Marine Le Pen made a carefully phrased barb about the origins of their relationship.

Looking down at her notes, she smirked and told him: “Mr Macron… I see you’re trying to play the teacher and pupil with me. But as far as I’m concerned it’s not particularly my thing.”

Yet Mrs Macron has herself shown she can laugh about their age difference. She is quoted in one book as having said: “He needs to go for it in 2017 because by 2022, his problem will be my face.”