South Koreans head to polls to choose next president 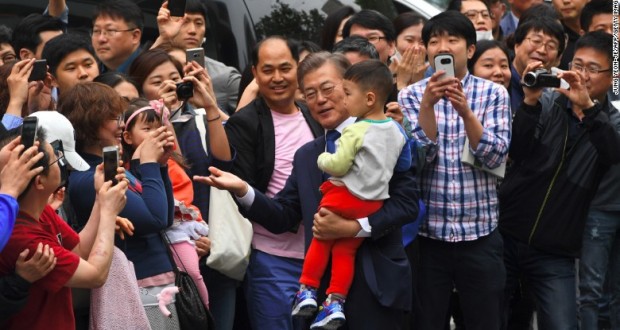 Frontrunner Moon Jae-in, candidate for the Democratic Party, smiled for the cameras as he lodged his vote early, Joinfo.com reports with reference to CNN.

Moon, who is seen as a “clean” candidate, ran against Park in 2012 but narrowly lost. Now most polls show him well in front.

If Moon wins, he’s expected to reshape Seoul’s policy on North Korea, by challenging the deployment of the US missile defense system, THAAD, and opening talks with Pyongyang.

Ahead of the vote, Pyongyang made its choice for South Korean president clear in a series of state media editorials calling for a boycott of conservative parties.

With former President Park, US President Donald Trump would have had a partner willing to take a hard line on Pyongyang. But Moon is seen as a candidate who could shake up the status quo in Seoul.

Moon was a strong proponent of the “Sunshine Policy,” an attempt to improve relations between the two Koreas from 1998 to 2008, and served as chief of staff to former South Korean President Roh Moo-hyun.

When they reach the polling station, South Koreans will be faced with a daunting list of 15 candidates, however two have already dropped out of the race. Ballots are marked with a red stamp against the name of the selected leader.

More than 11 million people — about 26% of the electorate — have already participated in early voting, according to the national election committee. As of 4 p.m. local time, 67% of South Koreans had already cast their votes.

Concerns about the economy, corruption and the country’s relationship with North Korea are foremost in voters’ minds, according to a recent poll from RealMeter.

The hasty election comes after Park Geun-hye, the country’s first female president, was impeached in a corruption scandal that allegedly connected her to business giants Samsung and the Lotte Group.

Many voters say they’re angry at Park and are ready for transparency.

“The electorate wants to punish the whole party for the misrule of the Park era,” said John Delury, a professor at Yonsei University.

Park has since been indicted for bribery and abuse of power. Prime Minister Hwang Kyo-ahn is serving as acting president until the election’s winner is inaugurated.

‘Tragedy will be extended’

North Korean state media took a shot at the departing conservative government the day before the vote.

“The tragic North and South Korean relationship had been brought on by the conservative groups, which have been in power for the past 10 years.

“They revived the period of confrontation and maximized the political and military confrontation,” the commentary in the state-run Rodong Sinmun newspaper read.

“If the conservative clique is to come into power again, the tragedy will be extended,” read the piece, which was credited to a personal contributor named Shim Chol Yong.

Some analysts say North Korea has toned down its provocations toward the South ahead of the election to avoid emboldening the country’s hard-liners.

Despite the global focus on North Korea, the biggest priorities for South Koreans are the economy and corruption.

“We saw recently a slightly bad side of our government,” said college student Nam Woo-hyu, 26. He said the most important issues for him in the election were “the job market for young people and economic development.”

Although she is too weak to walk, 87-year-old Lim Sung-ryeom said she wanted to vote because she was “very concerned” about her country.

“It was a very tough day for me to come all the way to the polling station. But I cannot miss my chance of making a great country,” she told CNN.

When questioned, older voters said they were concerned about the prospect of a liberal leader such as Moon Jae-in coming to power.

Yoon Ji-na, mother to a 18-month-old daughter, told CNN after casting a vote that she came to the polling station in the hope that her vote would help the nation return to normal.