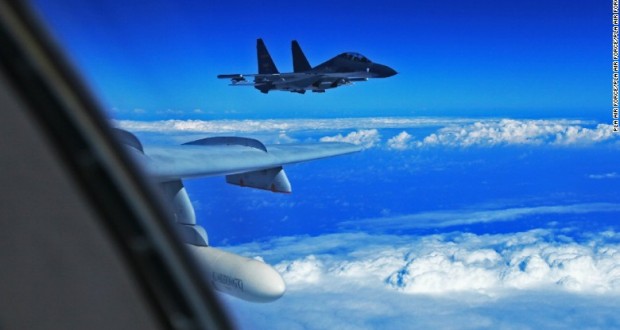 The US crew aboard the US Air Force WC-135 characterized the move as “unprofessional,” according to the statement from Air Force Lt. Col. Hodge, Joinfo.com reports with reference to CNN.

“While we are still investigating the incident, initial reports from the U.S. aircrew characterized the intercept as unprofessional. The issue is being addressed with China through appropriate diplomatic and military channels,” Hodge said.

Earlier, a US official told CNN the Chinese jets came within 150 feet of the US plane, with one of the Su-30s flying inverted, or upside down, directly above the American plane.

Dubbed the “Constant Phoenix,” the four-engine WC-135 jet looks for distinctive elements a nuclear test of any type would emit into the air. The collected samples can be analyzed to determine exactly what occurred.

The WC-135 has been regularly deployed on routine missions in Northeast Asia, according to the US official. The planes have been used in the past to gather evidence of possible nuclear tests by North Korea.

The Air Force has two of the WC-135 jets that operate out of Offutt Air Force Base in Nebraska.

Wednesday’s incident was the second between US and Chinese planes this year.

In February, US defense officials said there was an “unsafe” close encounter between a US Navy P-3 Orion aircraft and a Chinese surveillance aircraft over the South China Sea.

In that incident, a US official told CNN the US Navy plane had to alter course to ensure there wasn’t a collision with what one official said was a People’s Liberation Army Air Force KJ-200. The planes came within 1,000 feet of each other, US officials said.

After the February incident, US officials said close encounters between US and Chinese forces are extremely rare, with no such incidents in 2015 and two in 2016.