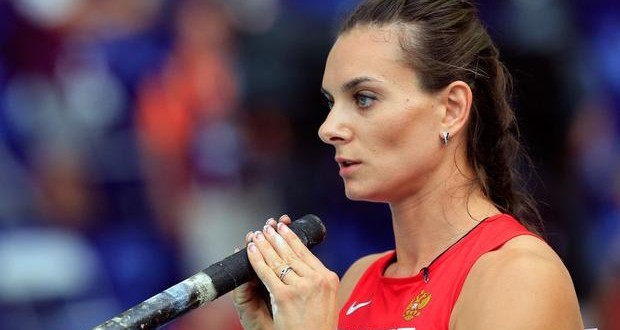 Yelena Isinbayeva will be removed from a key anti-doping position in Russia as she is a barrier to the country’s compliance with the World Anti-Doping Agency code, the body says, according to the BBC.

The double Olympic pole vault champion, 34, has been critical of the punishment of Russian athletes over evidence of state-sponsored doping in the country. She was one of those banned from taking part in the 2016 Olympic Games in Rio.

Russia has until November to comply, or those athletes will remain suspended.

Isinbayeva, now retired, was not mentioned by name as the World Anti-Doping Agency (Wada) gave its latest update on Russia’s progress towards compliance on Thursday.

But after former Wada president Dick Pound referenced opposition within the body to her appointment in March, Rob Koehler, chair of Wada’s Compliance and Review Committee said: “As of 31 May, the person will be gone.”

On Friday, Russia’s deputy prime minister Vitaly Mutko was quoted by the R-Sport news agency as saying Isinbayeva “will definitely step down from her post”.

Wada also announced plans to introduce new powers that would allow it to ban individual national Olympic committees and international sport federations that fail to meet its rules.

Last year, the body recommended a blanket ban on Russian athletes from Rio 2016, but the International Olympic Committee (IOC) left it up to individual sports’ governing bodies to decide.

The plans require approval from signatories – including the IOC – but Wada would like to bring it into effect in early 2018, meaning it could feasibly ban Russia from the Winter Olympics if it deemed it necessary.

Speaking to the BBC, Lee Hee-beom, president of Pyeongchang 2018’s organising committee said: “We will maintain a clean Games.

“I understand Russia is doing an aggressive job in meeting criteria, and as long as they meet the criteria they can participate.

“I am hoping and I am confident that the Russians will participate. We welcome their participation.”

‘They’re giving us the middle finger’

Wada has previously said Isinbayeva’s appointment as Russian Anti-Doping Agency chair was “not consistent” with plans it had agreed over necessary reforms.

The other changes being demanded by Wada include drug testers being allowed access to closed cities, where athletes continue to find sanctuary from testing; access to athlete biological passports and the implementation of a conflict of interest policy.

On Thursday in Montreal, Wada president Sir Craig Reedie said he was hopeful conditions would be met by November.

“The board decided that if we receive, as I am sure we will, that Russia are taking care of the four small conditions then they will start a testing programme that is a crucial part of the road map we have towards full compliance.

“I’m grateful today for the Foundation Board for agreeing that testing in Russia will be able to commence hopefully at the beginning of June.

“The next Foundation Board meeting is in November and I really hope by that stage the road map process is finished.”

“They (Russia) are clearly jerking us around putting the pole vaulter (Isinbayeva) in charge,” he said.

“That was Russia basically giving us this,” he added, holding up his middle finger.

“If you want to get back inside you’d better bloody well convince the people who you need to convince that you have turned the corner.”