Shares
The former wife of Russian president Vladimir Putin helped create and now supports a foundation that owns a historic Moscow property generating millions of dollars from tenants, a Reuters examination of property records has found. 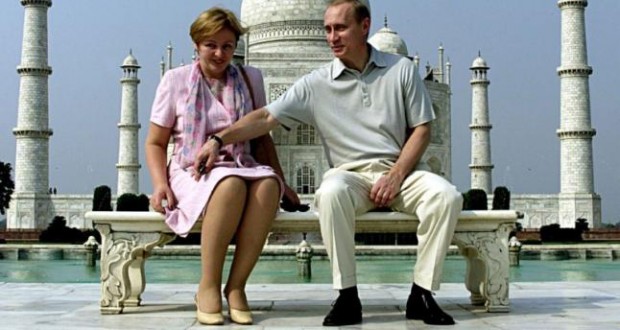 The building was renovated with help from associates of Putin, and the rental income is paid to a private company owned by a person whose name is the same as the maiden name of Putin’s former wife, corporate records show, according to Reuters.

The rent comes from Volkonsky House in central Moscow, which was an aristocrat’s home in pre-Soviet times and is now owned by The Centre for the Development of Inter-personal Communications (CDIC). Lyudmila Putina helped set up the non-commercial foundation, according to a report in state newspaper Rossiiskaya Gazeta and two sources who worked with the center. Lyudmila was Putin’s wife from 1983 until their divorce, which was announced in 2013.

The foundation was created in 2002, and in September 2006 Rossiiskaya Gazeta described Lyudmila as a “trustee” of the organization. In an interview with the newspaper that year, she used the term “we” when discussing the foundation, and three sources currently familiar with the foundation’s work said Lyudmila supports a literary prize and publishing arm that the foundation runs.

The CDIC has offices in Volkonsky House, but most of the building is let out to tenants, including two big state banks, documents show.

The tenants pay rent to a company called Meridian, which is 99 per cent owned by a company called Intererservis, corporate and property records reviewed by Reuters in early May showed. Intererservis, according to a state register of corporate entities, has been wholly owned since 2014 by a woman called Lyudmila Alexandrovna Shkrebnyova – which is the maiden name of Putin’s former wife.

Reuters was unable to find documents confirming that Shkrebnyova and Putin’s ex-wife are the same person. But other connections, besides the name, point to the former first lady and the owner of Intererservis being the same person. A previous general director of Intererservis was Olga Alexandrovna Tsomayeva. Several Russian media reports refer to her as the sister of Putin’s former wife. Tsomayeva could not be reached for comment.

In addition, the other 1 percent of Meridian is owned by Tatiana Shestakova, who was the wife of Vasily Shestakov, an old friend and judo sparring partner of Putin, until the Shestakovs divorced in 2013. Shestakova, who also helped create the CDIC, according to the state registry of corporate entities, could not be reached for comment.

The Kremlin property department supervised the renovation work on the Volkonsky House in Moscow’s Vozdvizhenka Street, according to rental documents reviewed by Reuters, even though the building no longer belonged to the state at the time.

A source involved in the renovation said Lyudmila Putina, then still the president’s wife, visited Volkonsky House to inspect the work. “We all knew that the (Kremlin property) department was constantly overseeing the process,” said the source, who spoke to Reuters on condition of anonymity. “When Mrs Putin made an inspection visit, they immediately closed down the whole of Vozdvizhenka Street.”

The Russian bank VTB, one of the current tenants in Volkonsky House, alone pays more than $2 million in annual rent, according to a tender document posted on a government website in 2015.

Reuters was unable to establish the total income Meridian receives from renting out space in the Moscow property or what it pays to the CDIC foundation. The company’s accounts for 2015 show revenues of 225 million roubles ($3.89 million), but do not disclose where the money goes.

Reuters sought comment from Meridian and the CDIC, via letters, telephone calls and visits, but received no reply. The Kremlin press service did not respond to questions about the president’s former wife.

The arrangements appear to fit a pattern in Putin’s Russia, whereby people close to the president benefit from contracts, loans, grants or assets from state enterprises or entities closely linked to the Kremlin. Reuters has previously reported how Putin’s son-in-law, Kirill Shamalov, became a billionaire after marrying a daughter of the president by acquiring a large stake in a leading Russian gas and petrochemicals company. Reuters also reported how Shamalov acquired a substantial property in Biarritz, France, from a close associate of Putin.

Artur Ocheretny, described in Russian media as Shkrebnyova’s new husband since 2015, is the chairman of the management board of the CDIC. In 2014, after a low-profile career running a seafood business and an event-organizing company, he too became the owner of an Art Deco villa in a suburb of Biarritz, according to local sources. His villa is estimated by estate agents to be worth about 6 million euros.

Ocheretny did not respond to a request for comment passed to him via the CDIC.

The building at 9 Vozdvizhenka Street is known as the Volkonsky House after its former owner General Nikolai Volkonsky, the grandfather of author Leo Tolstoy. In the 20th century, Sergei Yesenin, a popular poet, wrote some of his works there.

This historic site was later owned by the Russian Foreign Ministry, according to a 1992 presidential decree signed by Putin’s predecessor. By 2005, property records show, it had passed to a body called the Centre for the Development of the Russian Language, which later changed its name to the Centre for the Development of Inter-personal Communications.

Reuters was unable to establish on what terms the language center acquired the building. The agency that handles state property, Rosimushchestvo, did not respond to Reuters questions about the building.

The property was in need of renovation, and around 2005 major refurbishment was carried out. The president’s allies stepped in to help. The Konstantinovsky Foundation, which was set up soon after Putin became president to restore the Konstantinovsky Palace near Putin’s native St Petersburg, provided financial help, according to its website. The president often uses the palace to host foreign leaders.

Vladimir Kozhin, who from 2000 until 2014 was head of the Kremlin property department, was on the board of the Konstaninovsky Foundation at the time the renovation work was carried out on Volkonsky House. Kozhin remains on the board, which has at least one other associate of Putin on it. Neither the Konstantinovsky Foundation nor Kozhin, who is now a presidential aide, responded to requests for comment.

Yelena Krylova, a spokeswoman for the Kremlin property department, said she had no information about the department having been involved in the renovation.

The first phase of work was completed by 2005, according to property documents, and later an extra floor was added. Natalia Samover, a historian who campaigned against the addition, told Reuters: “The building has lost its historical appearance. We no longer have the Volkonsky House, we have an eyesore half a kilometer from the Kremlin.”

Volkonsky House now has 5,288 square meters of floor space available for rent, according to the state property register – an area slightly larger than the White House in Washington D.C.

Foundations such as the CDIC can be created for “social, charitable, cultural, educational, scientific and management objectives,” according to the Russian Justice Ministry. They can carry out entrepreneurial activity so long as it serves the purpose for which a foundation was created.

For an undisclosed amount, the CDIC lets most of Volkonsky House to Meridian, which sublets out space in the property. VTB, one of Russia’s largest banks, rents 3,011 square meters, according to the 2015 tender document posted on the state procurement website. That document gives the value of the contract as 584 million roubles over a five year period, or $2.02 million per year.

Asked to comment, VTB said in a statement: “We rent these premises for the needs of the retail and corporate businesses of VTB group.”

Other tenants include state lender Sberbank; the Severstroygroup construction company, which has won defense ministry contracts; a travel agency; a sushi restaurant; and a Burger King outlet. Sberbank said it had rented space at market rates as part of its branch strategy; Severstroygroup did not respond to requests for comment.

Knight Frank, an agency that specializes in high-end real estate, said that current market rates in the building were about $600 per square meter per year. If all the leasable space in the building were let at that rate, it would generate annual revenue of $3.18 million.

In 2015 the CDIC spent 262,317,000 roubles ($4.53 million), according to the accounts, of which 3.4 percent was spent on social and charitable help, 6.5 percent on holding conferences and seminars, 22 percent on administrative costs and 29 percent on “other activities.” The remaining 39 percent was spent on acquiring fixed assets, stock and other property, and on “miscellaneous” items.

The CDIC did not respond to questions about the sources of its income and how it spent its money.