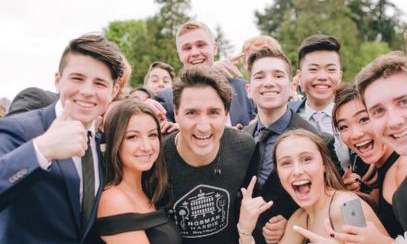 The keen sportsman had been out for a run along the Stanley Park Seawall when he passed a group of students in full formalwear, according to the BBC.

His official photographer Adam Scotti tweeted a picture of the moment, captioned: “Prom season in #Vancouver”.

At first glance, it appears the PM has pulled off a sly photobomb. 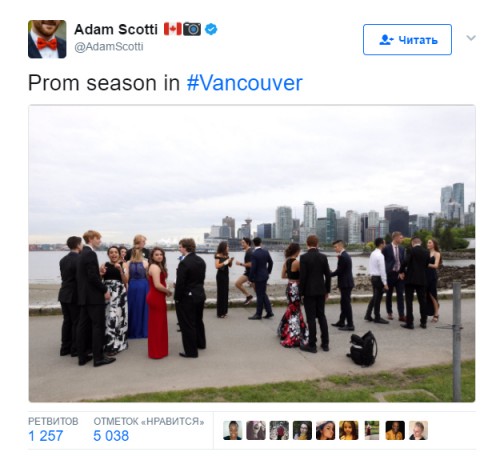 But one delighted student told Canada’s CBC the group had spied him in shorts and t-shirt, and begged him to join their photo-shoot.

“We were just taking photos and hanging around talking, and then Trudeau, he just comes running,” Constantine Maragos said.

“At first, we were like, ‘Why is the prime minister of Canada running the seawall? And then we started yelling for Trudeau to get in the photo.” 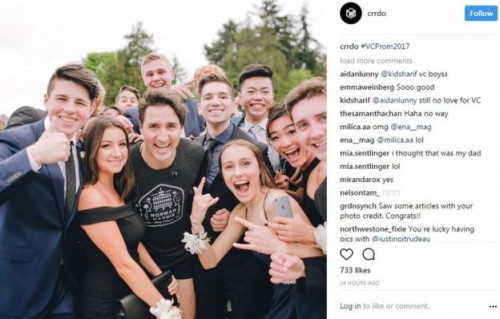 “We were stoked,” Mr Maragos confirmed.

The winsome world leader has a knack for showing up in unexpected pictures, frequently shirtless.

Back in August 2016 he was snapped on holiday in Tofino, British Columbia, standing by as a bride-to-be prepared for her beach wedding.

The same month, a Canadian family stumbled on him emerging from a cavewhile hiking in Quebec’s Gatineau Park.

The selfie honours went to 13-year-old Alexander Godby on that occasion.

“When you step out your front door, you never know what adventures await,” his father Jim Godby noted later on Facebook.