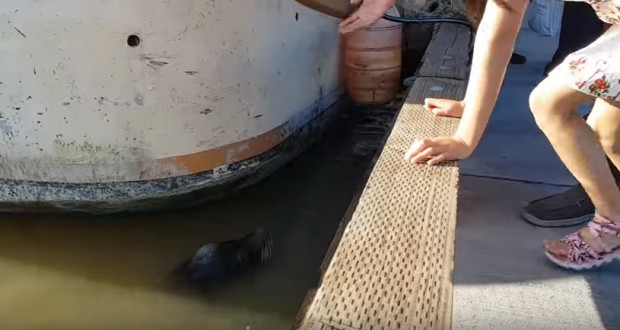 A local resident captured dramatic video on Saturday showing a sea lion grabbing a young girl by the dress and dragging her into the water off a dock at Steveston in Richmond, British Columbia, Joinfo.com reports with reference to CBC News.

SFU student Michael Fujiwara was on the dock when he saw the large, male sea lion approach, so he started filming it as a crowd gathered around the animal.

He says a family began feeding it bread crumbs while the young girl got close to the edge of the dock.

“And it initially jumped up to the girl to read her I guess,” he said of the incident seen at the 1:35 mark of the video above. “And then it came back up a second time, but this time grabbing the girl by the waist and dragging her down into the water.”

Fujiwara says he does not know if the man who jumped into the water to rescue the girl was related to her. He says it appeared that no one was injured in the incident, but the girl and those with her left immediately after getting her back on the dock.

“They were pretty shaken up,” he said. “Her family were just in shock.”

Fujiwara says he goes once a week to the docks, sees sea lions often, but has never witnessed anything like what he was able to capture on video.

Andrew Trites, the director of UBC’s Marine Mammal Research Unit, does not blame the animal for its behaviour in the video.

According to Canada’s Marine Mammal Regulations, “no person shall disturb a marine mammal except when fishing.”

Trites says the sea lion in the video looks like it is used to having people feed it.

“The little girl has her back to the sea lion and it would appear that the sea lion sees part of her dress, thinks it’s food, reaches up, grabs at the food and pulls her in by the dress. But it wasn’t food of course.”

Trites hopes the video of the encounter teaches others to not feed wild animals like sea lions. He says the animals are not inherently dangerous and are not looking to grab people.

“You keep your distance. Watch the animals, but let wildlife be wildlife.”

I captured a scary moment of a seal dragging a young girl into the water at the #Richmond Steveston Wharf #Vancouver https://t.co/58mzL0v1mM