Home / World / Melania Trump wears veil, but not a headscarf

Melania Trump wears veil, but not a headscarf

Shares
Melania Trump has dutifully considered every outfit she has worn during her first trip abroad as first lady -- her visit with Pope Francis on Wednesday was no exception. 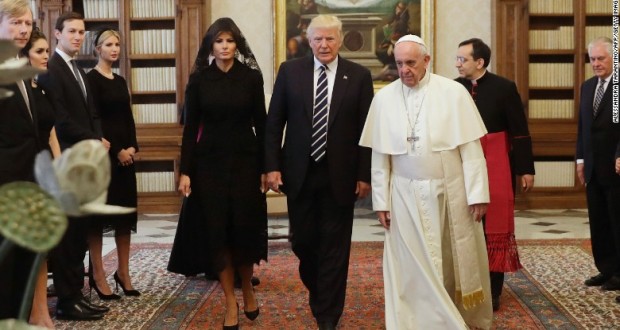 With Vatican protocol in mind, the first lady arrived to meet the Pope on Wednesday wearing a black veil and long-sleeved Dolce and Gabbana black dress draped down to her calf. President Donald Trump’s daughter, Ivanka Trump, wore a similar outfit with a larger veil, according to CNN.

“Per Vatican protocol, women who have an audience with the Pope are required to wear long sleeves, formal black clothing, and a veil to cover the head,” Stephanie Grisham, the first lady’s communications director, told CNN.

Days earlier, during her visit to Saudi Arabia, a strictly conservative Muslim theocracy, the first lady eschewed the customary headscarf, but stepped foot in the birthplace of Islam wearing a black jumpsuit reminiscent of the abaya worn by most women there. Despite not covering her head, the first lady’s outfit earned her rave reviews from the local press, who praised her attention to the country’s culture. 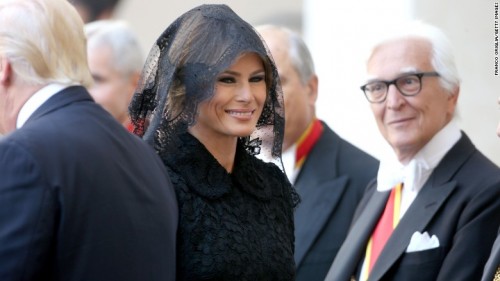 When asked why she wore a veil at the Vatican but eschewed a head covering in Saudi Arabia, Grisham said there was no request or requirement for her attire from that country.

The first lady also displayed some local flair during a visit to a children’s hospital in Rome, where she spent time speaking in Italian with some of the children at the Bambino Gesu hospital, a White House official said.

“She personally wrote a letter to the Pope asking to go. Princess Diana and Mother Teresa have both visited as well,” Grisham said.

Melania Trump has prepared extensively, with the help of State Department officials, on the proper protocol and customs for each of the stops on the foreign trip, according to sources familiar with the preparations. She wanted to ensure a smooth debut on the world stage as first lady and avoid any embarrassing missteps.

The former model-turned-first lady styled most of the outfits herself, a source said, and her ensembles have drawn rave reviews from local news outlets along the way.

Her sky-high heels have caused heartburn for some her hosts who fretted about her stability on cobble stone streets in Jerusalem. But aides good-naturedly laughed off the concern, noting that she grew up in Slovenia and is hardly a stranger to navigating bumpy terrain in stilettos.

In contrast with his wife, the President spent relatively little time focused on local customs and courtesies. In the weeks leading up to the trip, Trump took part in briefings with his national security adviser H.R. McMaster, Secretary of State Rex Tillerson and son-in-law and senior adviser Jared Kushner, who played a pivotal role in the planning the trip.

Those briefings were “almost entirely focused on the issues and deals,” rather than local protocols, a senior administration official said.

But behind the scenes, Melania Trump worked to ensure the President was prepared. She has made a habit of packing for her homebody husband when he goes overseas. Prior to this jaunt abroad, a source said she briefed staff members on how to pack for the President’s foreign travels.

The first lady’s strategy was to pack a separate bag for each stop of the trip, taking every stop as a separate focus.

Many people are saying it was wonderful that Mrs. Obama refused to wear a scarf in Saudi Arabia, but they were insulted.We have enuf enemies

Her outfit choices on this trip are so far in line with former first lady Michelle Obama, who also donned a black veil while meeting Pope Benedict XVI in 2009. Obama also chose not to wear a headscarf in Saudi Arabia and at the time, the President criticized the decision tweeting: “Many people are saying it was wonderful that Mrs. Obama refused to wear a scarf in Saudi Arabia, but they were insulted. We have enuf enemies.”