Shares
French President Emmanuel Macron has said his clenched handshake with Donald Trump was "not innocent" and was a "moment of truth". 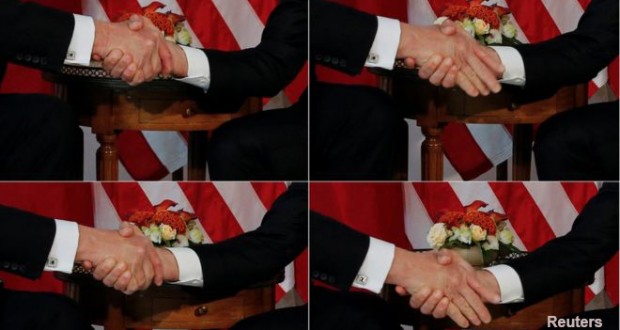 The awkward encounter saw each grip the other’s hand so firmly that their knuckles turned white, according to the BBC.

Mr Macron told French media he had wanted to “show he would not make small concessions, not even symbolic ones, but also not overdo things”.

The leaders met in Brussels on Thursday ahead of a Nato summit.

As their vigorous handshake continued over several seconds, Mr Macron and Mr Trump also looked each other fixedly in the eyes until the US president attempted to disengage.

Mr Macron told the Journal du Dimanche newspaper his approach to the encounter had been about getting respect.

“Donald Trump, the Turkish president or the Russian president see things in terms of power relationships, which doesn’t bother me,” he said.

“I don’t believe in diplomacy through public criticism but in my bilateral dialogues I don’t let anything pass. That is how you get respect.”

Mr Trump’s hand contact with foreign leaders has been closely scrutinised since he took power.