Shares
Researchers at the Washington University School of Medicine made the device that features a cap that contains electrodes to detect electrical signals in the brain. It connects to a brace which sits over the hand and triggers it to move 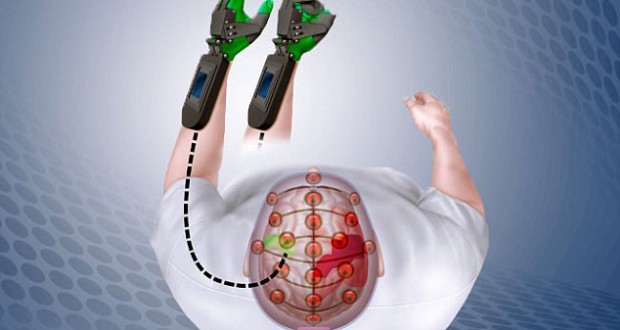 A new device has helped a group of stroke sufferers to regain the use of their paralyzed hands, according to MailOnline.

The machine, developed by the Washington University School of Medicine in St Louis, targets a small part of the brain that is needed to send the first ‘movement signal’ to our fingers.

After 12 weeks of using the device, 10 patients increased their grasp ability by 6.2 on the 57-point scale.

While it may sound like a small number, experts insist it was a huge step in stroke research.

For some, it even provided enough strength to put on a pair of pants.

‘For some people, this represents the difference between being unable to put on their pants by themselves and being able to do so.’

The technology called Ipsihand comprises a cap that contains electrodes to detect electrical signals in the brain, a computer that amplifies them and a movable brace that fits over the hand.

The device detects the wearer’s intention to open or close the paralyzed hand moving it in a pincer-like grip, with the second and third fingers bending to meet the thumb. 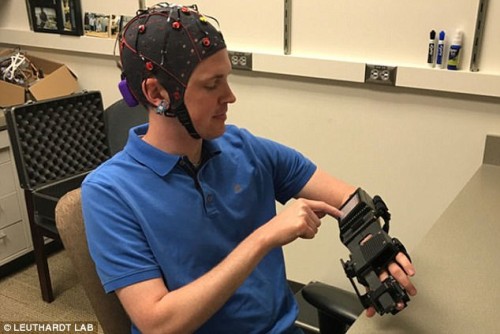 Dr David Bundy, of the University of Kansas, said: ‘Of course, there’s a lot more to using your arms and hands than this, but being able to grasp and use your opposable thumb is very valuable.

‘Just because your arm isn’t moving exactly as it was before, it’s not worthless.

‘We can still interact with the world with the weakened arm.’

Among other things, participants were asked to pick up a block and place it at the top of a tower, fit a tube around a smaller tube and move their hands to their mouths.

Each participant also rated his or her ability to use the affected arm and his or her satisfaction with the skills. Self-reported abilities and satisfaction significantly improved over the course of the study.

Stroke is the leading cause of acquired disability among adults. About 700,000 people in the United States experience a stroke every year, and 7 million are living with the aftermath.

Stroke affects about 152,000 Britons a year, with two in three suffering paralysis of the arm. One in six will suffer a stroke in their lifetime.

The study published in Stroke said people rapidly recover some abilities, but their progress typically plateaus after about three months.

Co-author Associate Professor Thy Huskey, also of Washington University, explained: ‘We chose to evaluate the device in patients who had their first stroke six months or more in the past because not a lot of gains are happening by that point.

‘Some lose motivation. But we need to continue working on finding technology to help this neglected patient population.’

In general, areas of the brain that control movement are on the opposite side of the body from the limbs they control. But about a decade ago, the researchers discovered a small area played a role in planning movement on the same side.

To move the left hand, specific electrical signals first appear in a motor area on the left side of the brain.

Within milliseconds, the right-sided motor areas become active, and the movement intention is translated into actual contraction of muscles in the hand.

A person whose left hand and arm are paralysed has sustained damage to the motor areas on the right side of the brain.

But the left side of the person’s brain is frequently intact, meaning many stroke patients can still generate the electrical signal that indicates an intention to move.

The signal, however, goes nowhere since the area that executes the movement plan is out of commission.

Professor Leuthardt said: ‘The idea is if you can couple those motor signals that are associated with moving the same sided limb with the actual movements of the hand, new connections will be made in your brain that allow the uninjured areas of your brain to take over control of the paralysed hand.’

Professor Huskey recruited moderately to severely impaired stroke patients and trained them to use the device at home – at least five days a week, for 10 minutes to two hours a day.

Ten completed the study after three dropped out due to unrelated health issues, poor fit or inability to comply with the time commitment.

How much each patient improved varied.

The degree was not down to time spent using the device but how well it read brain signals and converted them into hand movements.

Professor Huskey added: ‘As the technology to pick up brain signals gets better, I am sure the device will be even more effective at helping stroke patients recover some function.’