Shares
Robert Bigelow, an important figure in the rapidly growing private space industry, has come out with some rather controversial views about alien life.

Mr Bigelow, 72, said he believed that aliens had come to Earth, and were continuing to do so, Joinfo.com reports with reference to IFL Science.

“I’m absolutely convinced [in aliens],” he said in an interview with with CBS News. “That’s all there is to it.”

He said he thinks there is an “existing ET presence” on Earth, and that he doesn’t “give a damn” about revealing his views in public. 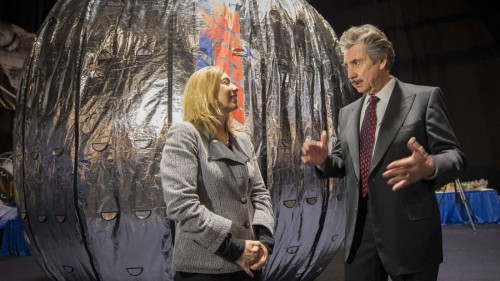 The idea that there is alien life elsewhere in the universe is not itself too controversial. There are billions of planets in our galaxy alone, so there might well be something out there – intelligent or otherwise.

But we probably don’t need to tell you that aliens are not visiting Earth (cue angry comments…). That Mr Bigelow believes so staunchly in it, well, that’s a bit worrying.

His company, Bigelow Aerospace, was responsible for installing the first ever inflatable module on the International Space Station (ISS) last year. This technology might one day be used for long-haul missions to Mars, making Bigelow Aerospace pretty useful.

Mr Bigelow is not the first high-profile space figure to believe aliens are visiting Earth. The late Apollo astronaut Edgar Mitchell, for example, had some interesting views on the matter.

But he may be one of the more influential. In the same interview, he talked about how private industry is becoming dominant in space, something that his company is very much involved in.

In April 2016, the Bigelow Expandable Activity Module (BEAM) was attached to the ISS. It expanded to five times its volume when it was pumped full of air in May, and astronauts are now monitoring how it is coping with being in space. It’s groundbreaking technology that no one has really perfected before.

The company also has a partnership with the United Launch Alliance (ULA) to look into building a space hotel in Earth orbit as early as 2020. Called the B330, it would allow for additional research to take place in Earth orbit. Several modules could be joined together to create a larger habitat, which could be visited by commercial spacecraft currently in production such as SpaceX’s Crew Dragon or Boeing’s Starliner.

Hopefully, Mr Bigelow’s views will not hamper any of his company’s efforts in these areas.