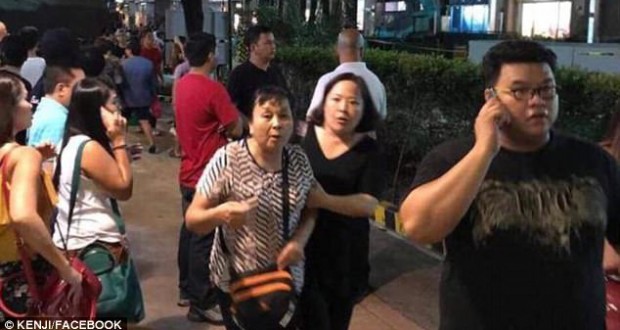 Dozens of tourists are feared injured after an ISIS gunman opened fire at a hotel resort near Manila airport in the Philippines, according to MailOnline.

The shooting happened at the popular Resorts World Manila in Pasay City, Philippines at about midnight local time.

Explosions and gunshots were heard coming from the tourist hotpot and bloodied victims were later seen being stretchered out of the building.

A masked gunman was seen on the second floor of one of the complex’s four hotels, where he is said to have fired at guests and hotel employees.

Footage, posted on social media, shows guests fleeing as gunshots ring out across the resort.

Kara Verano filmed people fleeing and described a ‘teargas burning’ substance in the air as she and her friends hid in a ‘restaurant storeroom’.

Writing on Facebook she said: ‘We were just eating at Bulgogi when we heard gunshots other customers said that there were men coming out of the casino wearing masks and armed.

‘We got stuck in the restaurant’s storage room for almost two hours with continuous gunshots coming from outside and smell something is burning.. I wasn’t sure if it was a teargas or something is actually burning.. it was as if impossible to breakout.’

Crowds of people ran from the complex as smoke billowed from the roof of one of the buildings.

ISIS have now claimed responsibility for the attack.

Resorts World Manila is opposite Terminal 3 of the Ninoy Aquino International Airport, and is one of the busiest airport terminals in the country.

As well as several hotels the complex includes a casino, shopping centre, cinemas, restaurants, clubs and a theatre.

‘Resorts World Manila is currently on lockdown following reports of gunfire from unidentified men,’ the company said on its Twitter account.

‘The company is working closely with the Philippine National Police to ensure that all guests and employees are safe.’

IS said ‘lonewolf soldiers’ from its group carried out the attack, according to the SITE Intelligence Group that monitors terrorist organisations.

Police confirmed there were reports of gunfire at Resorts World, which is across a road from one of the main terminals of the Philippines’ international airport.

There were no immediate reports of fatalities or injuries.

Philippine President Rodrigo Duterte imposed martial law last week across the southern region of Mindanao to crush what he said was a rising threat of Islamic State there.

He declared martial law shortly after militants went on a rampage through the southern city of Marawi, which is about 800 kilometres (500 miles) south of Manila.

Security forces are still battling the militants in Marawi, and the clashes there have left at least 171 people dead.

Duterte said last week he may need to declare martial law across the rest of the country if the terrorism threat spread.

US president Donald Trump is receiving updates from his national security team following the incident.

White House spokesman Sean Spicer tweeted that ‘@POTUS is aware of the situation in Manila and being provided updates by his national security team.’