Shares
At least six people have been killed and 48 injured in a terror attack in central London, with police shooting three suspected assailants dead. 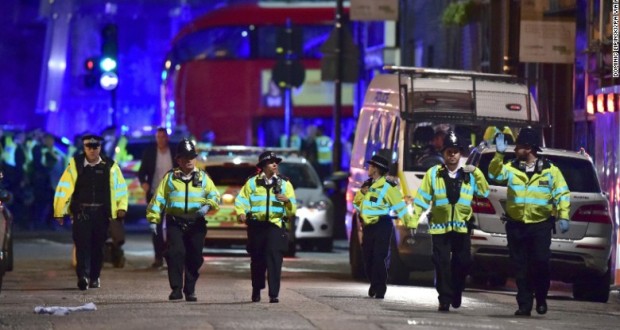 According to a statement by Metropolitan police assistant commissioner for specialist operations, Mark Rowley, the attack began late Saturday night, when a white van stuck pedestrians on London Bridge, according to CNN.

The suspects then left the vehicle and “a number of people were stabbed, including an on-duty British Transport Police officer who was responding to the incident at London Bridge,” said Rowley. The officer received serious but not life-threatening injuries.

“Armed officers responded very quickly and bravely, confronting three male suspects who were shot and killed in Borough Market,” said Rowley. “The suspects had been confronted and shot by the police within eight minutes of the first call. The suspects were wearing what looked like explosive vests but these were later established to be hoaxes.”

Eyewitnesses reported panic as the incidents unfolded in the vicinity of a major transport hub and in an area packed with restaurants and bars. The London Ambulance Service said at least 48 people were taken to five hospitals, with many more treated at the scene.

The attacks came days before a general election and two weeks after 22 people were killed when a suicide bomber targeted an Ariana Grande concert in Manchester. It was the third terrorist attack to strike the United Kingdom this year, after a man drove a car into pedestrians on Westminster Bridge in March.

British Prime Minister Theresa May said authorities were dealing with a “terrible incident” and London’s Metropolitan Police Service said incidents at London Bridge and nearby Borough Market were being treated as terrorism. The investigation is now being led by the Metropolitan Police Counter Terrorism Command.

London Mayor Sadiq Khan said it was “deliberate and cowardly attack” on Londoners enjoying a Saturday night out.