Shares
Egypt is closing its airspace to Qatari planes in a growing diplomatic row, with Saudi Arabia and Bahrain expected to do the same on Tuesday. 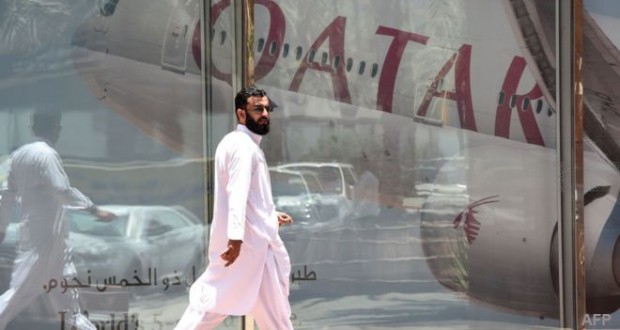 Several countries have cut ties with Qatar, accusing it of supporting terrorism in the Gulf region, according to the BBC.

Qatari nationals in Bahrain, Saudi Arabia and the UAE have been given two weeks to leave.

Qatar denies backing militants and its foreign minister has called for “a dialogue of openness and honesty”.

Egypt said it was closing off its airspace to Qatar from 04:00 GMT on Tuesday “until further notice”.

Travel disruption is expected as the airport in Doha, Qatar’s capital, is a major hub for international flight connections.

Airlines affected will include Qatar Airways, Etihad Airways and Emirates.

When avoiding the massive neighbour to the west, Saudi Arabia, Qatari planes will inevitably have to take longer routes leading to longer flight times.

An anonymous Somali official told AP news agency at least 15 Qatar Airways flights had used Somalia’s airspace on Monday, many more than on a normal day.

The states who joined the move against Qatar, a tiny but gas-rich peninsula, on Monday include some of the biggest powers in the Arab world.

Saudi Arabia, Bahrain and the UAE closed all transport ties by air, land and sea to Qatar.

They gave all Qatari visitors and residents two weeks to leave their territory, and banned their citizens from travelling to Qatar.

The UAE and Egypt expelled Qatari diplomats, giving them 48 hours to leave.

Saudi Arabia closed down a local office of Al Jazeera but said Qatari citizens would still be allowed to take part in the annual Hajj pilgrimage to Mecca.

In a country reliant on imported food, residents began to stockpile. AFP news agency said queues in one shop were 25 people deep.