Shares
China's latest mode of public transportation is a bus, tram and train rolled into one. 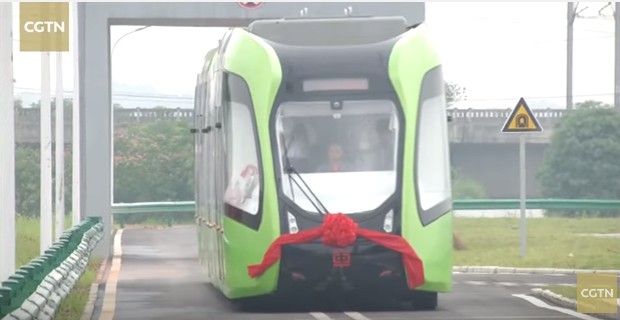 Its maker, Chinese rail transit firm CRRC, is calling it a “smart bus,” but it’s a lot more than that. Like a train, it’s modular and carriages can be added on; but like a bus, it runs on the road, according to Mashable.

Amazingly, the carriage will follow a preset path and won’t need a driver — but it won’t need tracks to be laid, either. The train is equipped with sensors that’ll allow it to follow white-dotted lines on the road.

“It is like having a virtual rail for the bus,” said Feng Jianghua, chief engineer of CRRC.

The 30 metre long bus is able to fit 300 passengers across three carriages. More carriages can be added or removed if needed.

The smart bus, or Autonomous Rail Rapid Transit (ART), is touted to be much cheaper than subway or tram systems, since it doesn’t require infrastructure to be laid down. This could prove to be the solution for many medium or small cities in China that can’t afford to build train lines.

It costs up to $102 million to build a kilometre of a subway track, as compared to about $2 million for a standard length ART bus, according to a report by Chinese state media Xinhua.

A 6.5km ART line will be built in the Chinese city of Zhuzhou, with operations starting in 2018.