Shares
Researchers have redated a long-overlooked skull from a cave called Jebel Irhoud to a startling 300,000 years ago, and unearthed new fossils and stone tools 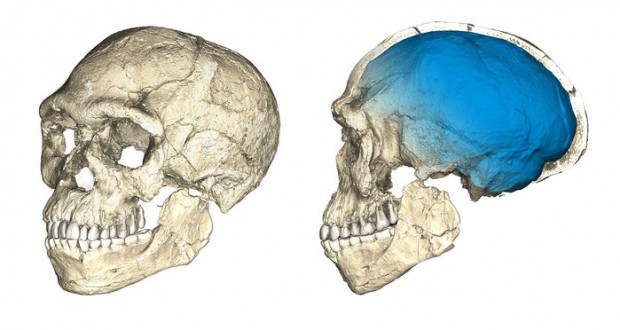 For decades, researchers seeking the origin of our species have scoured the Great Rift Valley of East Africa. Now, their quest has taken an unexpected detour west to Morocco: Researchers have redated a long-overlooked skull from a cave called Jebel Irhoud to a startling 300,000 years ago, and unearthed new fossils and stone tools. The result is the oldest well-dated evidence of Homo sapiens, pushing back the appearance of our kind by 100,000 years, according to Sciencemag.

“This stuff is a time and a half older than anything else put forward as H. sapiens,” says paleoanthropologist John Fleagle of the State University of New York in Stony Brook.

The discoveries, reported in Nature, suggest that our species came into the world face-first, evolving modern facial traits while the back of the skull remained elongated like those of archaic humans. The findings also suggest that the earliest chapters of our species’s story may have played out across the African continent. “These hominins are on the fringes of the world at that time,” says archaeologist Michael Petraglia of the Max Planck Institute for the Science of Human History in Jena, Germany.

Back in 1961, miners searching for the mineral barite stumbled on a stunningly complete fossil skull at Jebel Irhoud, 75 kilometers from Morocco’s west coast. With its big brain but primitive skull shape, the skull was initially assumed to be an African Neandertal. In 2007, researchers published a date of 160,000 years based on radiometric dating of a human tooth. That suggested that the fossil represented a lingering remnant of an archaic species, perhaps H. heidelbergensis, which may be the ancestor of both Neandertals and H. sapiens. In any case, the skull still appeared to be younger than the oldest accepted H. sapiens fossils.

Those fossils were found in East Africa, long the presumed cradle of human evolution. At Herto, in Ethiopia’s Great Rift Valley, researchers dated H. sapiens skulls to about 160,000 years ago; farther south at Omo Kibish, two skullcaps are dated to about 195,000 years ago, making them the oldest widely accepted members of our species, until now. “The mantra has been that the speciation of H. sapiens was somewhere around 200,000 years ago,” Petraglia says.

Some researchers thought the trail of our species might have begun earlier. After all, geneticists date the split of humans and our closest cousins, the Neandertals, to at least 500,000 years ago, notes paleoanthropologist John Hawks of the University of Wisconsin in Madison. So you might expect to find hints of our species somewhere in Africa well before 200,000 years ago, he says.

One of the few people who continued to ponder the Jebel Irhoud skull was French paleoanthropologist Jean-Jacques Hublin, who had begun his career in 1981 studying a jaw found at Jebel Irhoud. When he moved to the Max Planck Institute of Evolutionary Anthropology in Leipzig, Germany, he got funding to reopen the now-collapsed cave, which is 100 kilometers west of Marrakesh, Morocco. Hublin’s team began new excavations in 2004, hoping to date the small chunk of intact sediment layers and tie them to the original discovery layer. “We were very lucky,” Hublin says. “We didn’t just get dates, we got more hominids.”

The team now has new partial skulls, jaws, teeth, and leg and arm bones from at least five individuals, including a child and an adolescent, mostly from a single layer that also contained stone tools. In their detailed statistical analysis of the fossils, Hublin and paleoanthropologist Philipp Gunz, also of the Max Planck in Leipzig, find that a new partial skull has thin brow ridges. And its face tucks under the skull rather than projecting forward, similar to the complete Irhoud skull as well as to people today. But the Jebel Irhoud fossils also had an elongated brain case and “very large” teeth, like more archaic species of Homo, the authors write.

The fossils suggest that faces evolved modern features before the skull and brain took on the globular shape seen in the Herto fossils and in living people. “It’s a long story—it wasn’t that one day, suddenly these people were modern,” Hublin says.

Neandertals show the same pattern: Putative Neandertal ancestors such as 400,000-year-old fossils in Spain have elongated, archaic skulls with specialized Neandertal traits in their faces. “It’s a plausible argument that the face evolves first,” says paleoanthropologist Richard Klein of Stanford University in Palo Alto, California, although researchers don’t know what selection pressures might drive this.

This scenario hinges on the revised date for the skull, which was obtained from burnt flint tools. (The tools also confirm that the Jebel Irhoud people controlled fire.) Archaeologist Daniel Richter of the Max Planck in Leipzig used a thermoluminescence technique to measure how much time had elapsed since crystalline minerals in the flint were heated by fire. He got 14 dates that yielded an average age of 314,000 years, with a margin of error from 280,000 to 350,000 years. This fits with another new date of 286,000 years (with a range of 254,000 to 318,000 years), from improved radiometric dating of a tooth. These findings suggest that the previous date was wrong, and fit with the known age of certain species of zebra, leopard, and antelope in the same layer of sediment. “From a dating standpoint, I think they’ve done a really good job,” says geochronologist Bert Roberts of the University of Wollongong in Australia.

Once Hublin saw the date, “we realized we had grabbed the very root of the whole species lineage,” he says. The skulls are so transitional that naming them becomes a problem: The team calls them early H. sapiens rather than the “early anatomically modern humans” described at Omo and Herto.

Some people might still consider these robust humans “highly evolved H. heidelbergensis,” says paleoanthropologist Alison Brooks of The George Washington University in Washington, D.C. She and others, though, think they do look like our kind. “The main skull looks like something that could be near the root of the H. sapiens lineage,” says Klein, who says he would call them “protomodern, not modern.”

The team doesn’t propose that the Jebel Irhoud people were directly ancestral to all the rest of us. Rather, they suggest that these ancient humans were part of a large, interbreeding population that spread across Africa when the Sahara was green about 300,000 to 330,000 years ago; they later evolved as a group toward modern humans. “H. sapiens evolution happened on a continental scale,” Gunz says.

Support for that picture comes from the tools that Hublin’s team discovered. They include hundreds of stone flakes that had been hammered repeatedly to sharpen them and two cores—the lumps of stone from which the blades were flaked off—characteristic of the Middle Stone Age (MSA). Some researchers thought that archaic humans such as H. heidelbergensisinvented these tools. But the new dates suggest that this kind of toolkit, found at sites across Africa, may be a hallmark of H. sapiens.

The finds will help scientists make sense of a handful of tantalizing and poorly dated skulls from across Africa, each with its own combination of modern and primitive traits. For example, the new date may strengthen a claim that a somewhat archaic partial skull at Florisbad in South Africa, roughly dated to 260,000 years ago, may be early H. sapiens. But the date may also widen the distance between H. sapiens and another species, H. naledi, that lived at this time in South Africa.

The connections among these skulls and the appearance of MSA tools across Africa at this time and possibly earlier shows “a lot of communication across the continent,” Brooks says. “This shows a pan-African phenomenon, with people expanding and contracting across the continent for a long time.”