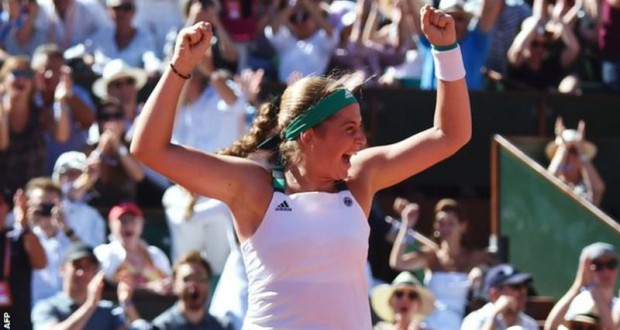 Ostapenko, ranked 47th, had never won a Tour-level title before and was playing in only her eighth Grand Slam.

She is the first unseeded woman to win at Roland Garros since 1933.

“I cannot believe I am champion at 20 years old. I love you guys. It’s so amazing to be here,” said Ostapenko.

“I have no words, it is my dream. I’m so happy. I knew Simona was a great player, but I tried to play aggressively and everything turned my way. I fought for every point. I’m glad it finished my way.”

Halep was playing in her second French Open final, after losing in three sets to Maria Sharapova in 2014.

“Now I want to congratulate Jelena – it’s an amazing thing. Keep it going because you are only a kid.

“I would like to thank my team, my parents. It’s a tough day, but let’s keep working and let’s believe.

“I felt sick in the stomach to play in this final, so maybe I wasn’t ready to win it, but maybe next time.”