Shares
Richard Hammond has apologised to his wife after crashing a supercar while filming The Grand Tour in Switzerland. 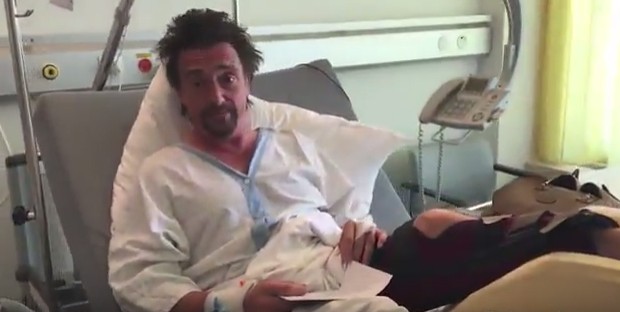 Richard Hammond injured his knee after the car veered off the road and down a grass verge while filming The Grand Tour in Switzerland, according to The Telegraph.

The host was taking part in a hill climb race on Saturday when the vehicle, a £2 million electric supercar, spun off the road, crashing down a hill.

The former BBC presenter published a video on drivetribe.com from his hospital bed, where his leg is propped up and supported by a brace.

In the video, entitled “I’m not dead”, he thanks medical staff for treating him and apologises to his wife Mindy and daughters Izzy and Willow.

He adds that he should be having an operation on the leg later this afternoon giving him a “Swiss army knee”. A tweet sent by a friend on Sunday morning confirmed that he had suffered a broken leg and needs surgery.

Sasha Martinengo wrote: “Hi all. Got a msg from @RichardHammond. He is fine. He has a broken leg and needs knee surgery. He might fly home for the procedure”.

A statement issued by the programme on Saturday afternoon said Mr Hammond was “conscious and talking” following the crash, and had climbed out of the car himself before it burst into flames.

The statement said he was “flown by air ambulance to hospital in St Gallen to be checked over revealing a fracture in his knee.

“Nobody else was in the car or involved in the incident, and we’d like to thank the paramedics on site for their quick response.”

The 47-year-old presenter was in a coma for two weeks and suffered serious head injuries after a jet-powered car he was driving for Top Gear crashed in 2006.

He was also injured in a motorbike crash while filming in Mozambique earlier this year.

The second series of the Amazon Prime show was due to be broadcast in October this year. Fans speculated online that the crash might mean this could be delayed.