Shares
A China Eastern Airlines jet suffered a major engine failure shortly after taking off out of Sydney for Shanghai on Sunday. 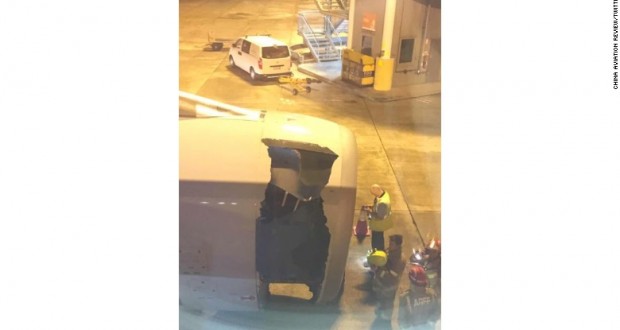 After the airplane landed safely back in Sydney, emergency crews found a gaping hole in the front part of the engine nacelle’s structural casing, known as the nose cowl, according to CNN.

The incident with the jetliner’s engines is the second of its kind in as many months.

No passengers or crew aboard the twin-aisle Airbus A330-200 were injured during the incident, according to Xinhua news. The jet typically seats around 265 passengers.

After hearing a “really, really loud” unexpected noise after takeoff, “nobody really panicked, but I was a little bit nervous and it kind of smelled like burning,” one passenger told CNN affiliate Seven Network.

Airbus said it is “aware of the incident and will support the investigation of this engine issue.”

A spokesman for Rolls-Royce, which manufactures the engine, said in a statement, “We are aware of the incident and will be working closely with relevant partners to understand the cause of the issue.”

The engine failure in Sydney resembles another recent incident. An EgyptAir flight from Cairo to Beijing in May aborted its takeoff after reporting a failed engine. The nose cowl on that Trent 700 engine also had torn away and had reportedly been ingested by the engine. No one was hurt during that incident.

Rolls-Royce, which powered both planes with the Trent 700 engine, said it was too soon to consider the incidents linked.

A 2011 directive by the European Aviation Safety Agency warned of two operators who “found extensive damage to engine air intake cowls” after the sound dampening panels around the front fan of the engine collapsed. An Emirates flight arriving in Dubai in 2006 sustained similar damage to its Trent 700 engine after a flight from Birmingham, England.

EASA at the time gave airlines 24 months or the accumulation of 5,000 takeoffs and landings or 20,000 hours, whichever came first, to conduct the inspections.

Airlines have a choice of three types of engines on the Airbus A330 workhorse. Rolls-Royce is the most popular choice on the fleet of more than 1,300 jets flying today.