Shares
The Queen's Speech - in which the government sets out its legislative programme - has been delayed for a few days, the BBC understands. 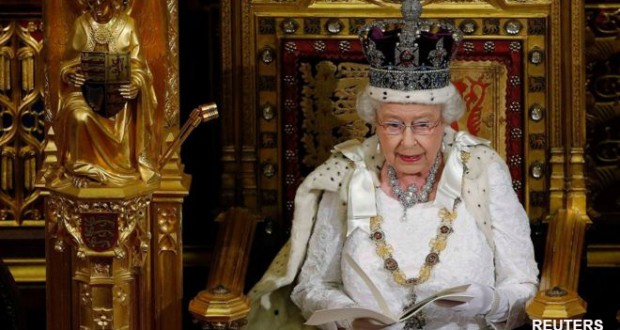 The set-piece event had been due to take place on Monday 19 June. The Conservatives are negotiating with the Democratic Unionist Party to get support for their minority government after losing their Commons majority in last week’s general election, according to the BBC.

Labour said the delay showed the government was “in chaos”.

The Queen’s Speech is written by the government and presents an outline of its planned legislation for the next Parliamentary session.

BBC assistant political editor Norman Smith said the decision to delay it revealed an “ambiguity” about what would go in it – with several manifesto pledges expected to be watered down or dropped – but also the need for the Tories to “nail down” DUP support.

A defeat for its Queen’s Speech would be tantamount to a vote of no confidence in the new minority government, he said.

One of the reasons for the delay is also believed to be because the speech has to be written on goat’s skin parchment paper, which takes a few days to dry – and the Tory negotiations with the DUP mean it cannot be ready in time.

Theresa May will face questions later from her backbenchers for the first time since Thursday’s election.

They are expected to raise concerns about her leadership style, and press for more details on talks with the DUP.

Mrs May’s new cabinet is also meeting for the first time after a reshuffle.

Earlier Brexit Secretary David Davis predicted some parts of the Tory manifesto would have to be “pruned” following the election result.

Speaking on BBC Radio 4’s Today programme, Mr Davis said that while the Tory election campaign had been disappointing, Mrs May was a “formidable prime minister” and accused people speculating about her leadership of “the absolute height of self-indulgence”.

But Labour leader Jeremy Corbyn has accused Mrs May of “squatting” in No 10, telling the BBC’s Andrew Marr Show on Sunday that the country “cannot go on with a period of great instability”.

On Sunday evening the PM finalised her cabinet with a small reshuffle, with Michael Gove returning to a ministerial role as environment secretary.

Mr Gove, who took on Mrs May for the party leadership after David Cameron quit, was sacked by the PM in her reshuffle in July last year.

The Conservatives went from 331 seats to 318 in the general election, while Labour increased its number of MPs from 232 to 262.

BBC political correspondent Iain Watson said the meeting with the committee of Tory backbench MPs had been brought forward by 24 hours, not because of panic within the party, but possibly as a way of avoiding it.

One MP told him: “The wise heads will need to tell any hotheads to calm down.”

The 1922 Committee is made up of all Conservative backbenchers – the name is taken from the year in which its original members were elected.

Its primary function is to keep the leadership of the party informed of the mood among the rank and file, and if a Conservative leader or other senior figure loses its support they could be in a particularly vulnerable position.

Graham Brady, chairman of the committee, told BBC One’s Sunday Politics there was “zero appetite” among the public for another election.

A number of high-profile members kept their posts in Sunday’s cabinet reshuffle, with Philip Hammond staying at the Treasury, Boris Johnson remaining at the Foreign Office and Amber Rudd keeping the Home Office brief.

But some changed jobs too, with Liz Truss being demoted from justice secretary to become chief secretary to the Treasury.

Damian Green, who was work and pensions secretary, has been promoted to become the first secretary of state – effectively Mrs May’s second in command.