Shares
Firefighters have worked through the night to dampen the deadly fire at a west London block of flats that killed 12 people and left many more missing. 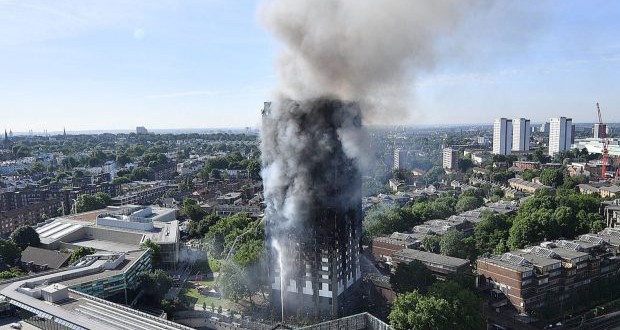 Flames could still be seen inside the tower block as crews used lights to search the building floor by floor, according to the BBC.

Sixty-five people were rescued after fire ripped through Grenfell Tower in north Kensington on Wednesday morning.

Police have warned the number of deaths is expected to rise, while PM Theresa May has promised a full investigation.

Thirty-four people remain in hospital – 18 of whom are in a critical condition.

Firefighters were called to the residential tower at 00:54 BST on Wednesday, at a time when “several hundred” people were thought to have been inside.

The tower had around 120 flats. The cause of the fire remains unknown.

Dozens of people left homeless by the fire have spent the night in makeshift rescue centres, while well-wishers have been signing a wall of condolence near the site.

Photographs have been left alongside messages for loved ones.

The Royal Borough of Kensington and Chelsea council said it had placed 44 households so far in emergency accommodation.

Through the night, people have been donating food, clothes and blankets for those left without homes.

Bhupinder Singh, one volunteer handling donations, said: “It is times like this that the best of our community comes out. This is where you find out how good it is to live in England and how good it is to be a Londoner.”

Questions have been raised about why the fire appeared to spread so quickly and engulf the entire building.

BBC Newsnight’s Chris Cook says the type of cladding on the outside of Grenfell Tower, installed in 2015, had a polyethylene – or plastic – core, instead of a more fireproof alternative with a mineral core.

Similar cladding was used in high-rise buildings hit by fires in France, the UAE and Australia, he said.

Appeals are being made on social media for news of friends and family who are still unaccounted for.

Among them is 12-year-old Jessica Urbano Ramirez, 66-year-old retired lorry driver Tony Disson and security guard Mo Tuccu, who was visiting friends in the tower to break the Ramadan fast.

By Wednesday evening, almost all of the building had been searched but crews were still trying to put out “pockets of fire” in hard to reach places, London Fire Brigade Assistant Commissioner Steve Apter said

Checks confirmed the building was not in danger of collapsing, London Fire Brigade added.