Shares
A man has died and 10 people have been injured after a man drove a van into worshippers near a north London mosque. 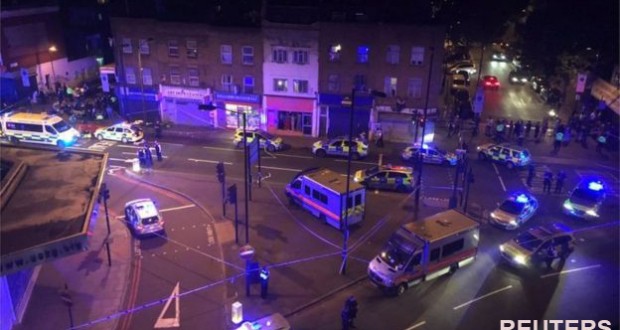 The van mounted the pavement and struck a group of people just after midnight BST near Finsbury Park Mosque in Seven Sisters Road. A 48-year-old man has been arrested, according to the BBC.

Prime Minister Theresa May said police were treating it “as a potential terrorist attack”.

Eyewitness Abdul Rahman said the driver said he wanted to “kill all Muslims”.

Mr Rahman told the BBC he struck the man and helped subdue him.

“I hit him on his stomach… and then me and the other guys… we held him to the ground until he couldn’t move. We stopped him until the police came.”

Counter-terrorism officers are at the scene, the Metropolitan Police said.

Harun Khan, secretary general of the Muslim Council of Britain said: “Over the past weeks and months, Muslims have endured many incidents of Islamophobia, and this is the most violent manifestation to date.

“We expect the authorities to increase security outside mosques as a matter of urgency.”

Many of the victims are believed to have just left evening prayers at the Muslim Welfare House after breaking the Ramadan fast.

The MCB said it was a “violent manifestation of Islamophobia” and called for extra security around mosques.

The PM will chair a meeting of the emergency Cobra committee later.

She described it as a “terrible incident”, adding: “All my thoughts are with those who have been injured, their loved ones and the emergency services on the scene.”

He has also asked people to “remain calm and vigilant”.

He said: “We don’t yet know the full details, but this was clearly a deliberate attack on innocent Londoners, many of whom were finishing prayers during the holy month of Ramadan.

“While this appears to be an attack on a particular community, like the terrible attacks in Manchester, Westminster and London Bridge it is also an assault on all our shared values of tolerance, freedom and respect.”

If confirmed as a terror attack it would be the fourth such incident in the UK in four months, after attacks in Westminster, Manchester and on London Bridge.

The van driver was arrested after being detained by members of the public at the scene following the collision at 00:20 BST.

Police said there were no reports of anyone suffering from knife injuries after speculation at the scene the driver was armed with a knife.

Abdulrahman Saleh Alamoudi said he was among a group of people helping an elderly worshipper who had fallen down when the van swerved towards them.

Video posted online of the aftermath showed a scene of chaos as people tried to help the injured.

One man could be seen giving CPR to a victim in the street while another man’s head injury was treated with a makeshift dressing.

An eyewitness told how he jumped out the way of the van as it struck.

He said: “He just came into all of us. There was a lot of people. We got told to move straight away.

Another who lives in a flat on Seven Sisters Road told the BBC she saw people “shouting and screaming”.

“Everyone was shouting ‘a van’s hit people’.

“There was this white van stopped outside Finsbury Park Mosque that seems to have hit people who were coming out of the mosque after prayers finished.”

She said the road was “backed up” with police cars, ambulance and fire engines.