Shares
The pop star was at the scene comforting those affected less than 24 hours after, and now she has visited Chelsea Fire Station to thank those who risked their lives 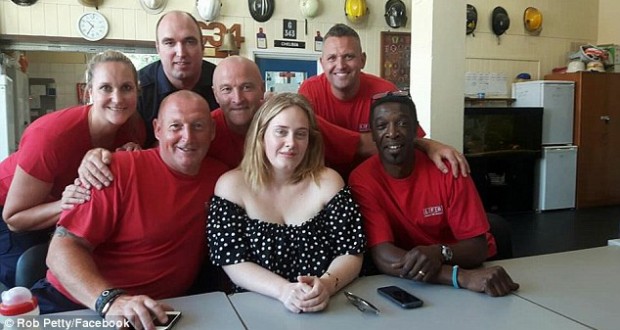 Adele has continued her support of the Grenfell Tower disaster’s heroes and victims by visiting Chelsea firefighters to thank them with a ‘cup of tea and a cuddle’, according to Daily Mail.

The pop star, who was at the scene of the inferno, which left at least 79 dead, less than 24 hours after it started. 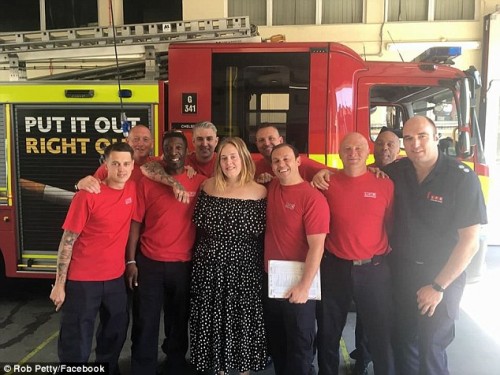 For that gesture she was praised for her humility and emotional response, as she took time to comfort those who were distressed or missing loved ones.

And now, the 29-year-old has taken more time out of her busy schedule to visit the heroes who risked their lives to rescue those still trapped in the burning block.

The photographs were shared on Facebook by Rob Petty, along with the caption: ‘Not everyday the wonderfully grounded and caring Adele pops into Chelsea Firestation for a cup of tea and a cuddle x’

The fire swept through the 27-storey tower block in just 15 minutes after a faulty fridge exploded.

Allegedly told to stay in their rooms, residents at the scene say people were sentenced to death when they were told not to leave.

Five people have been formally identified after the blaze tore through the residential block last Wednesday in west London.

The rest are missing presumed dead and Metropolitan Police Commander Stuart Cundy said ‘the awful reality is that we may not be able to identify all those that died’ inside what is now a blackened and charred shell.

There were emotional scenes at the site in north Kensington at 11am as firefighters halted work to join residents for a minute’s silence held to remember those who lost their lives and all others affected by the blaze.

The silence was also observed at Government buildings across the country.

Mr Cundy said the death toll of 79 may still change, but not as significantly as it has in recent days.