Home / World / Huge iceberg about to break off Antarctica

Huge iceberg about to break off Antarctica

Shares
An iceberg almost twice the size of California is about to split from Antarctica. But it’s what may happen after that which is a worry. 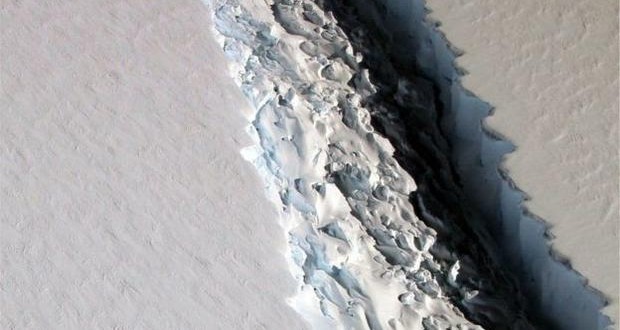 In the coming weeks, a huge lump of ice is expected to break off from Antarctica, according to News.com.au.

At around 5000sq km, it will be the third-largest iceberg ever recorded and could accelerate the demise of a massive ice shelf that, if it were to also disintegrate in years to come, could lift sea levels around the world by up to 10cm.

A fissure in the Larsen C ice shelf in west Antarctica, the sliver of the continent which points toward South America, has been developing since 2010.

It is now 200km long and up to 5km wide in some parts. It has crept west, in fits and spurts, over the past seven years, but in the past few weeks, events have taken a dramatic turn.

In late May, the cleaving suddenly accelerated with 17km of ice cracking apart in just six days.

That has left just a 13km sliver of ice keeping the 500m-thick chunk of ice attached to the main part of the shelf.

When it does finally break off it will be third largest iceberg ever recorded. But it’s what could happen after that that has experts worried.

Project MIDAS (Melt on Ice Shelf Dynamics and Stability) is a UK-based Antarctic research project, investigating the effects of a warming climate on the Larsen C ice shelf.

Dr Adrian Luckman of Swansea University is one of the team’s leaders and regularly provides updates of Larsen C’s movements.

“The rift tip appears also to have turned significantly towards the ice front, indicating that the time of calving is probably very close,” Dr Luckman and fellow researcher Martin O’Leary wrote in a recent blog post for MIDAS.

“There appears to be very little to prevent the iceberg from breaking away completely.”

Dr Luckman said that when it calves, the Larsen C Ice Shelf will lose more than 10 per cent of its area, an event that “will fundamentally change the landscape of the Antarctic Peninsula”.

Earlier this week, he posted a timelapse of the cracking.

Scientists fear the Larsen C shelf could follow the fate of its predecessors Larsen A and Larsen B which broke up in 1995 and 2002 respectively.

The 2002 event, which was recorded by NASA in a dramatic time-lapse took just over one month for a huge area of ice to break up.

“They had never witnessed such a large area – 3250sq km – disintegrate so rapidly,” NASA said at the time.

An ice shelf is called a shelf because it floats on the ocean. It is normal for ice shelves to calve big icebergs as snow accumulation gradually pushes old glacier ice out to sea.

But the size of the pending Larsen C iceberg and the speed at which is has developed has alarmed some researchers, who suggest the consequences of it splitting off could be huge.

Computer modelling by some researchers suggests the calving of Larsen C’s big ice block might destabilise the entire ice shelf, which is about 50,000sq km – roughly three-quarters the size of Tasmania.

NASA’s Operation IceBridge said the creation of an iceberg will not raise sea levels itself, but the collapse of an ice shelf could accelerate the rate at which the glaciers behind it move towards the ocean, which can lead to sea level rise.

It’s estimated if the entire Larsen C shelf collapses, global waters could rise by 10cm, although many researchers are quick to point out that scenario is not a given.

One worrying sign is that the breakup of the Larsen C ice shelf is part of wider unfreezing of the continent, say scientists.

In the past few months alone, researchers have documented rain on a continent more known for snow, widespread surface melt in West Antarctica along with networks of rivers and melt ponds, reports Climate Central.

While much of the summer melt was driven by an El Nino weather pattern, scientists fear disappearing ice shelves could trigger “unstoppable” melt.