Shares
Belgian military opened fire on a suspected attacker ‘in a suicide vest’ at a Brussels station tonight. 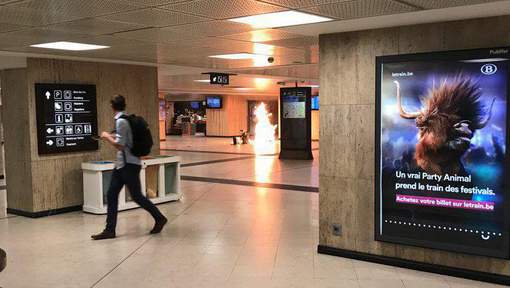 ‘There was an explosion around a person,’ a police spokesman said. ‘That person was neutralised by the soldiers that were on the scene’, according to Metro.

A photo shared online shows flames in the building of Brussels Central as a passerby turns to look.

Belgian media quoted witnesses claiming the man shouted ‘Allahu Akbar’ (‘God is great’ in Arabic) before he was shot.

The situation is said to be under control with no civilian casualties.

DH newspaper quoted a Belgian prosecutor as saying: ‘He seems to have set off his device when the soldiers started paying attention to him.’

The Brussels prosecutor’s office says there appears to be no civilian injuries or deaths from a train station explosion.

‘Explosions at Brussels Central,’ Arash Aazami tweeted. ‘We missed them by practically nothing, evacuated into restaurant for now.’

The army was in place to guard the Central Station, amid a heightened state of alert after Islamic State militants based in Brussels carried out attacks in Paris killing 130 people in November 2015, and bombed Brussels airport and metro in March last year.

A police spokesman said: ‘At the moment, the police are in numbers at the station and everything is under control.’

The station and main square have been evacuated and police and Belgian military are at the scene.