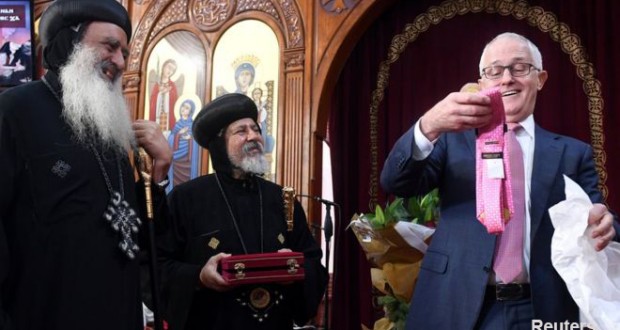 The official Trump-branded item was given to Mr Turnbull as part of a joke by Sydney’s Coptic Orthodox church, according to the BBC.

His relationship with Mr Trump became a talking point after the US president was reported to have abruptly ended a phone call between the two in January.

Mr Turnbull later disputed this and the pair are said to have repaired ties.

The Australian prime minister smiled and posed with the silk necktie after receiving it from Pope Tawadros II of Alexandria and Coptic Orthodox Bishop Daniel on Sunday.

Ties between Australia and the US were briefly strained after the leaders’ famously difficult first phone call over a refugee resettlement agreement, which was initially made by former US President Barack Obama.

Mr Trump was said to have become irritated and broke off what was supposed to be an hour-long call after 25 minutes, later tweeting that the refugee deal was “dumb”.

Earlier this month footage leaked to the media showed Mr Turnbull poking fun at Mr Trump at a dinner for the media.

But US and Australian brushed the incident off as harmless fun.

“Everyone says politicians are too serious, too scripted. You gotta lighten up right? It’s Australia,” he said.