Shares
SpaceX nailed its second launch in three days Sunday with liftoff of a Falcon 9 rocket from Vandenberg Air Force Base in California carrying 10 satellites owned by Iridium Communications. 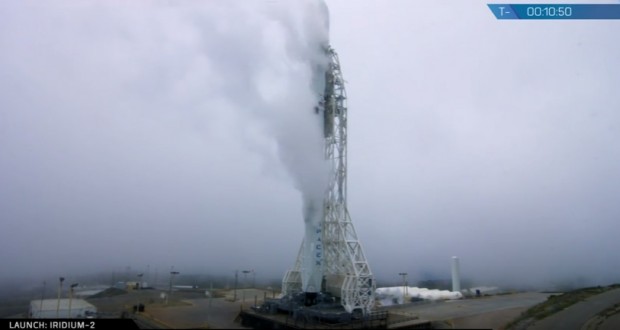 The 23-story tall booster lifted off from a fog-shrouded Pacific Coast launch pad at 1:25 p.m. local time (4:25 p.m. EDT/2025 GMT). The first stage separated as planned 2.5 minutes later, turned around and headed back toward a drone barge floating in the ocean, according to Space.com.

Redesigned, larger grid fins, mounted near the top of the 14-story-tall first stage, helped guide the returning booster to a precision touchdown despite strong winds, marking the 13th time a SpaceX rocket has returned intact to Earth. Two of those rockets, including the one used to send Bulgaria’s first communications satellite into orbit on Friday, had launched on previous missions, demonstrating the boosters’ reusability.

The new grid fins, made of titanium instead of aluminum, can withstand the heat of atmospheric re-entry without shielding, SpaceX CEO Elon Musk wrote on Twitter. “Can be used indefinitely with no touchups,” he said.

Closeup of the titanium grid fins. Not painted, as they glow red hot during a fast reentry. pic.twitter.com/Ltrq1Prg2m

The three-day turnaround between launch of BulgariaSat-1 on Friday and the Iridium satellites on Sunday was the quickest yet for SpaceX, which pulled off the feat by relying on two separate launch teams, one based at Kennedy Space Center in Florida for Friday’s launch and the second at Vandenberg, which handled the polar-orbiting Iridium satellite flight. Mission control for both flights was at the company’s Hawthorne, Calif., headquarters.

With Sunday’s successful launch, SpaceX has completed nine flights in 2017 — surpassing its previous annual flight record with six months of the year still to go. The privately-owned firm is aiming to fly around 20 missions before the end of the year, SpaceX representatives have said.

Two or three of those flights will be for Iridium, which has purchased a total of eight Falcon rocket rides to deliver a constellation of 75 next-generation satellites into orbit by mid-2018 —  66 operational satellites and nine in-orbit spares, according to Iridium.

The first batch of 10 Iridium birds flew in January 2017. Sunday’s launch was the second for Iridium, which is paying SpaceX a total of $536 million for the eight launches. The final flight of five Iridium satellites will share its rocket ride with a pair of gravity-mapping Earth science satellites. The German Research Center for Geosciences, which is partnering with NASA on the Gravity Recovery and Climate Experiment Follow-on, or GRACE-FO, mission will reimburse Iridium for $31.8 million of the final $67.9 million launch tab, said Allison Carollo, a spokeswoman for Iridium.

Iridium’s original seven-flight, $468.1 million contract with SpaceX, signed in March 2010, includes a free reflight in case of a launch failure, Carollo wrote in an email to Space.com.

In total, SpaceX has more than 70 launches, worth more than $10 billion, on its manifest, said company spokesman John Taylor.

SpaceX’s next launch is targeted for mid-July for Intelsat.